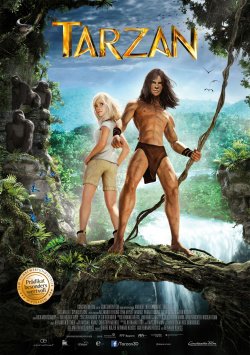 Since the release of the first adventures around Edgar Rice Burroughs' "Tarzan" there have been countless new interpretations of the material in book and comic form or as a musical, TV series and film. Especially in the latter medium, the adventure hero raised by monkeys has already experienced many incarnations. Whether it's a classic adventure film, a comedy, erotic sloppiness or a cartoon for the little ones, "Tarzan" seems to be one of those things the audience just can't get enough of. And so now also "The Conference of the Animals" director Reinhard Kloos has taken care of the popular subject in order to conjure a very big Motion Capture 3D adventure out of it.

In his animated version he crashes researcher John Greystoke together with his wife and his son with the helicopter over the African jungle. While the parents die, the little boy, who is found and raised by a group of gorillas, survives. Many years he lives without any contact to other people in the midst of the animals. Only when he has matured into a young man, who calls himself Tarzan, does he meet the beautiful Jane Porter. Immediately the two fall in love, but there is no time for them to really live out these feelings. The unscrupulous entrepreneur William Clayton, who travelled to the jungle with Jane, wants to find the legendary meteor that Tarzan's father had been looking for. For the rock of the meteor holds an undreamt-of power - and for Clayton this also means great power and wealth. And if obstacles get in his way, they have to be removed - even if that means destroying nature or killing annoying witnesses like Jane. But of course Tarzan cannot allow that…

"Tarzan 3D" has some really good technical aspects to offer. The landscapes are great animated and also some of the 3D effects are really impressive. As far as the figures are concerned, their appearance needs getting used to, as it sometimes seems a bit mask-like. Still, that's not a knockout criterion either. This, in turn, is provided by the script, which inflates the familiar template quite shamelessly with elements from "Avatar" and other films. A few snappy pop songs and fast-paced 3D roller coaster rides through the jungle are of course not to be missed. And since the whole thing is primarily made for children, the violence also remains rather bloodless and without really dramatic consequences (and there it can also be spoiled that even gunshot wounds are not really fatal here). And even the dinosaurs so popular with the target audience could still somehow be squeezed into the story.

It seems again and again that the makers have tried with all their might to incorporate all this into their "Tarzan" version, which has worked well in recent years, especially in 3D cinema. But this is not only at the expense of originality. Every form of charm is lost as well. Even though some technical aspects are impressive and especially the motion capture specialists put a lot of effort and heart and soul into the movie, the result unfortunately seems extremely unimaginative and - even worse - completely soulless. You don't have to make any comparisons to Disney's much better animation version of "Tarzan" to see how one-dimensional the characters are drawn despite their pretty 3D look, how flat the dialogues are and how intrusively the politically correct eco-message is implemented.

Whoever is looking for a great 3D animation adventure that offers fun and excitement in equal measure, is unfortunately wrong with "Tarzan 3D". It may be that there will be a few children who will love the film anyway - but that doesn't automatically make it better. It may be that there were good intentions and passion on the part of the makers - but the end result is hardly noticeable. And unfortunately in the end there can be no other recommendation than: just worth seeing on a visual level - but otherwise grab the next liana and swing out of the cinema as fast as possible!