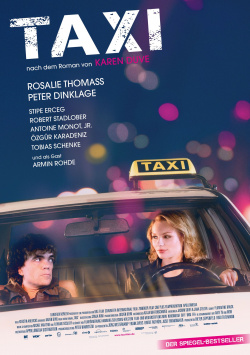 Taxi - based on the novel by Karen Duve

Hamburg in the 80s: Rather than languish in a dull office job as an insurance saleswoman, 25-year-old Alexandra (Rosalie Thomass) ventures into an absolute male domain and tries her hand at driving a taxi. Of all things, the young woman is assigned to the night shift, which causes not only her new boss Mergolan to shrug his shoulders. But Alexandra is fascinated by the colorful creatures that populate the otherwise quiet Hamburg at night. And driving through the almost empty streets in the dark is the perfect way for the loner to clear her head. But then one day Marc (Peter Dinklage) gets into her car. He is a rather unusual passenger, and not just because of his height of 1.35 meters. With his engaging manner, he also manages to break through Alexandra's defensiveness and begin an affair with her. The young taxi driver doesn't like the fact that she seems to have slipped into a relationship with her colleague Dietrich (Stipe Erceg) completely unnoticed. Relationship chaos and a desire for freedom - they just don't mix and have to end in a bang...

Taxi, based on the novel of the same name by Karen Duve, is a mixture of atmospheric big-city romance, quirky comedy and life-discovery drama. Director Kerstin Ahlrichs has two big plus points: the first is the absolutely authentic 80s atmosphere, which is perfectly expressed in the set, music and narrative tone. The second plus point are the actors, first and foremost an absolutely convincing Rosalie Thomass. The Munich native underlines an extreme versatility with her performance, which also pays off for the believable portrayal of different facets of Alexandra. Even Game of Thrones star Peter Dinklage, who has been a reliable bank of great acting cinema since his appearance in the tragicomedy Station Agent, comes across as a wee bit pale in some scenes alongside Thomass.

There are, moreover, facets of the story that are genuinely interesting. But overall, the production, like the main character, just comes across as too undercooked and unapproachable in many moments to warm the audience to Alex's trip of self-discovery. As atmospheric as the realization of author Karin Duve's script is, as good as the actors act, the film lacks accessibility. Some viewers and connoisseurs of the novel will certainly succeed in getting involved with the story. But due to the undercooled melancholy that dominates the action, the film could also seem very unwieldy and maybe even irrelevant for some other viewers.

This is a pity, because especially Alex, but also Marc are really interesting characters, but at least in the film version they run the risk of seeming one-dimensional in a certain way due to the mentioned aloofness. However, viewers who manage to get involved with the story and its characters are taken on an atmospheric journey back to the 80s, where they are treated to great acting and a pleasantly kitsch-free romance. Even though Taxi might not be to everyone's taste, the film can definitely be recommended to lovers of German program cinema fare, despite a few flaws. Worth seeing!

Cinema trailer for the movie "Taxi - based on the novel by Karen Duve (Deutschland 2015)"
Loading the player ...