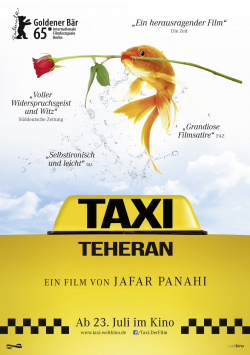 For acclaimed Iranian filmmaker Jafar Panahi, his work is a calling and his art an important tool for raising his voice against oppression and injustice. This has gotten him into a lot of trouble in the past. A jail sentence and a 20-year ban from working, leaving the country and being interviewed for propaganda against the system have already been handed down. But that doesn't stop Panahi from continuing to make films and get his message out to the world. With Taxi Tehran he wants to draw an affectionate portrait of his homeland and its people, but of course he does not spare criticism of the system. The finished film was then smuggled to Germany, where it immediately won the Golden Bear for Best Film at the 65th Berlinale.

When a filmmaker reveals such commitment and passion for his art, and his film then also reveals a lightness that comes as a complete surprise given the difficult circumstances, then of course one must shower such a work and its creator with praise. So it's no wonder that the reviews are overwhelming and that there are only positive voices about Taxi Tehran. Of course, this should also be acknowledged. Because even if the political aspect plays into the assessment, it can't be entirely blamed for the many hymns of praise. Nevertheless, I find it difficult to join the general enthusiasm for this film for several reasons.

For one thing, there are the individual little episodes that make up this taxi ride through Tehran. Whether it's a fan of the filmmaker who illegally deals in films and series banned in Iran, from Woody Allen to Walking Dead, wanting Panahi to be his partner in crime, or a woman fearing for her husband who was injured in an accident, only to have bigger worries about her financial future, or the filmmaker's niece wanting to make her own short film project for school from the passenger seat, it's already a colorful kaleidoscope of characters being carted around Tehran in a taxi. And as amusing or charming as most of these people may be, their storylines drag on unnecessarily far too often. What starts out very nice and quite entertaining, eventually just seems annoying and even with all the knowledge of the political explosiveness somehow irrelevant. Moreover, the concept is not new, as it strongly reminds of the reality show Taxicab Confessions or the wonderful parody that comedian Chris Rock once staged for his HBO show. To praise Panahi's style as particularly original and unadulterated is therefore, in my view, grossly overstating the case.

Another problem is the treatment of Jafar Panahi himself. It is pointed out a little too often by passengers what a great filmmaker he is. While he is indeed an important artist of great talent to many of his countrymen in particular, the whole thing doesn't come across as self-deprecating, as perhaps intended, but smacks a bit too much of self-adulation. Certainly, those who want to see a view of Iran away from the current negative clichés, without the problems in the country being glossed over or glossed over, will perhaps actually recognize in Taxi Tehran the masterpiece that most critics see in the Berlinale winner. But those who hope for entertainment in the classical sense, or at least for really rousing conversations, might quickly be not only bored but even annoyed by this taxi ride. Therefore, there is only with reservations here a cautious: Worth seeing!