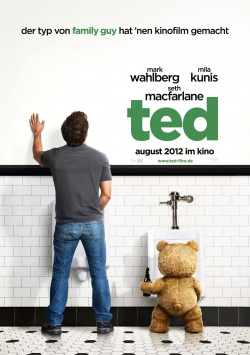 A cute teddy bear who can talk and befriends a little boy and remains his best friend until he grows up - that can really only be a cute children's film. Far from it, because who knows the previous works of director Seth McFarlane (Family Guy, American Dad) will suspect that Ted also has it fist thick behind his fluffy ears and misses no opportunity to entertain his audience with gags of the particularly raunchy and politically extremely incorrect kind.

Ted tells the story of John Bennett (Mark Wahlberg), who as a boy wanted nothing more than a best friend. He got his wish when his Christmas present, a cute teddy bear, suddenly comes to life and faithfully stands by his side from then on. At first Ted is a real sensation, he dominates the media and becomes the darling of the Americans. But over time, the fame fades and he is left with only his best friend John. The two go through thick and thin, which John's girlfriend Lori (Mila Kunis) gets on his nerves in the long run. She wants John to finally grow up - and that will only happen if he stops hanging out with Ted. But can John give up their shared pot smoking, shared passion for Flash Gordon, and Ted's protective ritual during thunderstorms so easily? And is the Teddy even capable of living on his own and standing on his own plush legs?

In the first few minutes of the film, Seth McFarlane makes it clear to his audience that his comedy about a rather unusual friendship is anything but kid stuff. His smoking pot, swearing, telling dirty jokes and having fun with prostitutes plush Teddy is not too shy for even the crudest joke. It's hardly surprising that some of the gags go over the top or that the audience can't stop laughing in view of the viciousness of some of the sayings. But underneath its coarse shell, the film has a fluffy soft heart that makes it easy to forgive Ted for some of his fecal-humorous and somewhat tasteless jokes.

The Teddy, who repeatedly resembles a cross between Peter Griffin and Dog Brian from Family Guy and the neurotic alien Roger from American Dad, truly doesn't mince words and lets loose many a line that makes you, as a viewer, not quite want to believe you just actually heard it. But McFarlane knows how to combine this politically incorrect nastiness with the teddy's high cuteness factor into an extremely charming whole. Moreover, he builds up the friendship between John and Ted in such a believable way that you quickly forget that you're watching a computer-animated teddy bear and that the initial situation of the story itself is completely hare-brained. And even the almost more unrealistic idea that a man should even have to consider whether to choose between his teddy or Mila Kunis is actually made comprehensible here.

Aside from a few less successful gags, there's also a small subplot about a man played by Giovanni Ribisi and his spoiled son who desperately wants to own Ted that doesn't quite want to work. While Ribisi does put on a truly memorable dance performance to I think we`re alone now by 80s teen starlet Tiffany, this whole plotline still feels a little too forced into the action. The actual conflict that builds up between John and Ted, which erupts in a great Bourne-esque duel sequence, would have been quite enough to tell an amusing, well-rounded story. As it is, the film feels a bit artificially bloated, but this can be tolerated in that even this weaker part of the comedy still has some really good laughs to offer.

A couple of great cameo appearances (the wordless appearance of a Hollywood star who tried his hand at superheroing last year in particular is just too delicious) and Mark Wahlberg's good-humoured interplay with his animated co-star make Ted a whole lot of fun at the cinema. Fine minds and viewers of a more sensitive disposition, however, should still give this one a wide berth. Because with his crude jokes, his bitterly nasty sayings and his complete negation of any form of political correctness, this Teddy makes even Sacha Baron Cohen and his cinematic alter egos (Borat, Brüno, the dictator) look almost well-behaved. But since the film has its heart in the right place, despite a few over-the-top gags, it still gets a: Absolutely worth seeing!