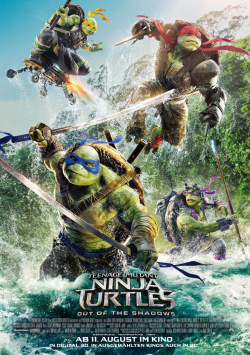 Teenage Mutant Ninja Turtles: Out of the Shadows

Brothers Leonardo, Raphael, Michelangelo and Donatello, better known as the Teenage Mutant Ninja Turtles, are back! They are real heroes - but no one can know that. The fact that they saved New York from the evil Shredder (Brian Tee) remains their secret, known only to reporter April O`Neil (Megan Fox) and cameraman Vernon (Will Arnett). The Turtles continue to carry out their fight for justice in the shadows. But when Shredder is freed from his captivity and he teams up with an even more dangerous enemy who could wipe out all of humanity, the Turtles must decide whether to continue hiding from the humans or show everyone that mutant turtles can be pretty big heroes, too.

Although slated by critics and many early fans, the Michael Bay-produced remake of Teenage Mutant Ninja Turtles two years ago morphed into a respectable success. Reason enough to whistle at the critical voices and commission a sequel. Actually, in its early days as an underground comic in the mid-1980s, the Ninja Turtles were conceived as a parody of the highly successful Daredevil and Ronin comic book series of the time, clearly aimed at an adult target audience. But the move from underground to commercial turned the pizza-loving Battle Turtles into heroes for the nursery, which has been especially noticeable in the second and third theatrical films and a short-lived live-action TV series. While the Turtles' spiritual fathers, Kevin Eastman and Peter Laird, have repeatedly tried to create slightly more adult Turtle comics as well, for the marketing strategists, kids were and are the real target audience. And that now seems to be the case with TMNT: Out of the Shadows.

While it rumbles and crashes so violently, smaller Turtle fans would be better off staying home. But the action always remains relatively non-violent and comic book-like, so slightly older kids won't be too scared off. The humor is most definitely infantile and especially Bebop and Rocksteady, who make their first screen appearance here, will have kids laughing heartily. For fans between 12 and 15 years, who already liked the first part, this sequel is absolutely successful. But even though that doesn't make it a good movie and the script is just a lot of nonsense, you have to give the makers credit for one thing: they obviously tried to satisfy older fans who grew up with the comics or the animated series with different characters and smaller allusions. And they succeeded really well in some moments.

While this remake almost completely lacks the anarchic humor of the comic book original and the charm of the old movies. But fun popcorn entertainment offers this second Transformers with turtles adventure all the time. And for adult viewers, there's still something to watch, after all: Arrow star Stephen Amell for the ladies and Megan Fox for the men, who is perhaps a little too sexily staged for a kids' movie. Acting-wise, no top performances should be expected here, but measured against the script, all actors deliver rock-solid performances. Therefore: Who has seen the first film, knows exactly what is offered here. For whom exactly that is an argument for the purchase of a movie ticket, for the TMNT: Out of the Shadows is then also well worth seeing!

Cinema trailer for the movie "Teenage Mutant Ninja Turtles: Out of the Shadows (USA 2016)"
Loading the player ...