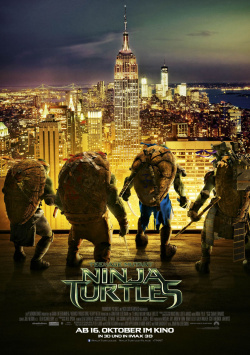 What began as an underground comic in 1984 soon became a phenomenon that is still extremely successful more than twenty-five years later. Because whether as a comic book, TV series, computer game or feature film - the Teenage Mutant Ninja Turtles have a cult following. Reason enough to finally let the four mutant turtles loose on the big screen once again after a seven-year hiatus.

Produced by Michael Bay, Teenage Mutant Ninja Turtles tells the story of the dedicated junior reporter April O`Neil (Megan Fox), who finally wants to be taken seriously by her colleagues and superiors and therefore ventures on a particularly hot story: she wants to get to the bottom of a mysterious criminal gang that puts New York in fear and terror. During her research she comes across a mysterious stranger who seems to make life difficult for the gangsters. When he also turns up at a hostage situation in the New York subway, April hunts him down. But what she discovers knocks the socks off even a tough journalist like April: the stranger is four masked heroes who are not human, but mutant turtles in their teens - the Teenage Mutant Ninja Turtles! April doesn't have long to get over the initial shock, as the evil Ninja Master Shredder and his minions could bring unimaginable disaster upon New York. And only the Ninja Turtles Donatello, Leonardo, Raphael and Michelangelo can stop it from happening with the help of April and her cameraman Vern (Will Arnett). Cowabunga!

The Ninja Turtles were actually conceived as a parody of the hugely successful comic book series Daredevil and Ronin at the time, clearly aimed at an adult target audience. However, the move from underground to commercial turned the pizza-loving Battle Turtles into heroes for the nursery, which has been especially noticeable in the second and third theatrical films and a short-lived live-action TV series. Though the Turtles' spiritual fathers, Kevin Eastman and Peter Laird, have repeatedly tried to create slightly more adult Turtle comics as well, for marketing strategists, kids have been and continue to be the real target audience.

This is also evident in this latest feature film from director Jonathan Liebesman (Wrath of the Titans). True, many of the action sequences are cut too quickly after all, especially for little Turtle fans, and are just too gritty, which is why the film's 12 rating is absolutely justified. But the not exactly subversive humor, in which also the obligatory fart gag may not be missing, and the Turtles' very cool sayings make it clear that the creators have targeted a young audience, who come here for the first time in contact with the comic heroes. This then explains the overworked look of the Ninja Turtles, which many fans of the first hour have difficulty coming to terms with.

It can't really be argued that Teenage Mutant Ninja Turtles would be a really good film. Neither the script, nor the actors can really convince here and the look of the film, which is strongly reminiscent of Bay's Transformers films, lacks any originality, as does the entire production. It should therefore be seriously doubted that the Turtles would ever have become the cult figures they are to this day, had they started with this film. Still: as pure popcorn entertainment true to the motto brain off - eyes on the whole thing works very well. In its very simplistic way, the film is fun and the action, while it may be uninspired in its execution, is really engaging. True, Megan Fox is again primarily something for the man's eye. But given the very thin script and very one-dimensional character sketch, she does a surprisingly good job. Will Arnett and William Fichtner are obviously completely underwhelming, but still deliver decent performances. And although the story itself really offers little new, the film is not even a second really boring.

Who can break away from the classic image of Teenage Mutant Ninja Turtles and just want to get fun, cracking entertainment cinema of the brand Michael Bay with lots of great special effects offered, gets here for his money quite a lot. But if you were hoping for clever humor, an interesting story and the charm of the old movies besides the action, you will be bitterly disappointed. Therefore, overall: with small reservations well worth seeing!