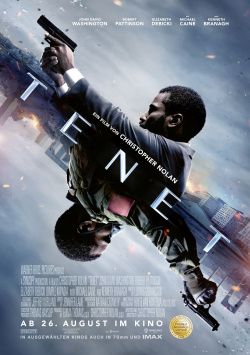 That's quite a load you've got on "Tenet", the new film from Christopher Nolan ("Dark Knight", "Inception"). It is the first blockbuster production to hit theaters since the Corona pandemic began. For studios and movie theater operators alike, the film is a glimmer of hope: If it manages to lure enough viewers to its hard-pressed theaters so that the $200 million production turns a profit, that could encourage other studios to release more prestige projects rather than keep postponing them. That being said, it's finally getting some really great cinema back where it belongs. And that just feels damn good!

Not to give too much away about the content. Broadly speaking, "Tenet" is about the mysterious hero (John David Washington), known only as the protagonist, stopping a powerful arms dealer (Kenneth Branagh) from bringing about the end of the world. And in order to do that, the laws of time as we know them are put out of commission. That's all you need to know before you go to the movies. Because "Tenet" lives not only from great pictures, but also from the mystery around the story, which admittedly comes along a bit confusing. If you thought "Inception" was already complicated to unravel with its various dream levels, you might well cut your teeth on this one - at least in places.

This is not a film to relax and switch off your brain. You have to stay attentive from the start, and also watch out for little things that might matter at the end. That makes it a wee bit unwieldy, but no less brilliant overall. Nolan impressively manages to take a familiar element like time travel (in the broadest sense) and make something completely original out of it - both dramaturgically and visually. One sequence in particular stands out: a great action sequence in which time runs forward and backward simultaneously. The fact that Nolan hardly resorted to CGI effects in the realization of this ambitious project, but mainly used practical effects on real filming locations, gives the film an authentic touch despite its not entirely realistic story, from which the overall impression clearly benefits.

The film is also quite great cinema in terms of acting - which is not a matter of course. John David Washington can convince as the protagonist in every second, Robert Pattinson has never been so sympathetic and adult as here and Kenneth Branagh gives a damn good, profound villain. Because of the good ensemble, which includes an undercooled yet very emotional Elizabeth Debicki, the whole thing works not only in the numerous action sequences (right from the opening sequence is spectacular in this respect), but also in the quieter character moments.

I honestly wondered, after my initial excitement, if my extremely positive impression of "Tenet" might have been intensified by the fact that, as a huge movie lover, I was happy to see the first really big theatrical film on the big screen since March. Yes, no question, that definitely played into the fact that this was a special screening for me. Still, even completely detached from the significance this film has for the industry as a whole, "Tenet" is simply a great piece of work: you can tell that a director was at work here who loves cinema, but who wants to offer not only great images and fast-paced action, but also intellectual challenges. He's managed to do that several times since "Memento", and it works out first-rate again with "Tenet" - provided, of course, you're willing to go for it.

Who likes movies like "Inception" and who can get involved with stories that are not quite anchored in reality, should not miss this work in the cinema - because "Tenet" simply belongs on the big screen. Absolutely worth seeing!