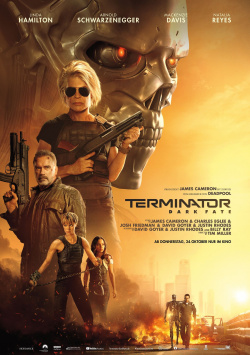 Sarah Connor (Linda Hamilton) changed the future over twenty years ago and stopped Skynet from destroying humanity. But even though the future has been changed, it still doesn't look very bright. For now a new, highly advanced Terminator (Gabriel Luna) appears from the future to kill young Dani Ramos (Natalia Reyes). Grace (Mackenzie Davis), a super soldier from the future, is determined to stop it, with a life and fate scarred Sarah Connor coming to her aid. But the Terminator, known as Rev-9, seems superior to them in every way. Only a Terminator from Sarah's past, an old T-800 (Arnold Schwarzenegger), could save Dani, and with it, the future of humanity.

Terminator: Dark Fate sounds on paper like a gift to all fans of the early Terminator films. The film picks up right where Part 2 left off with its great opening sequence, ignoring all the other films that didn't go over very well with fans anyway. Moreover, not only James Cameron, the creator of the franchise, but also leading actress Linda Hamilton is back on board. Tim Miller, who directed Deadpool, an action thriller with extremely high entertainment potential, was hired to direct the film. With these prerequisites, nothing stands in the way of a successful revival of the franchise, right?

No question, Terminator: Dark Fate is leaps and bounds better than the last few installments. The film revisits the strengths of the series, and there's also a sense that they tried to do everything right here and deliver to the fans what they've been waiting for in vain for so long. The problem is that nothing new is delivered. The story is really just a variation of what was already told in part 2. And the effects, which were once groundbreaking, can't amaze you anymore either. The beginning is absolutely successful and gives hope. But soon an all-but-before feeling sets in that even the occasional climax can't quite dispel.

Yes, the film is entertaining, and seeing Linda Hamilton back on screen with Arnold Schwarzenegger has a certain appeal. But that's just not enough to hide the fact that the writers - who include James Cameron - just can't seem to come up with anything new. This sixth Terminator film is probably the third best in the series. Still, it leaves the bland taste that a lot of opportunities were wasted here by the creators playing it too safe. Nostalgia is all well and good, but a real surprise or something that would have taken the whole thing in a whole new direction would have made this movie what the fans really wanted it to be. So in the end, despite a good entertainment value, we are left with the conclusion that maybe it is finally time to kill this franchise. Therefore, there is the decent worth seeing only with some clear deductions.