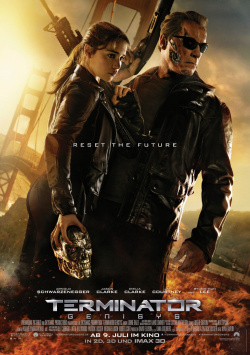 All of Sarah Connor's (Emilia Clarke) attempts to prevent the apocalyptic war between man and machine have failed. And so now, in 2029, her son John (Jason Clarke) fights as the leader of the resistance against the machines developed by Skynet. When a Terminator is sent to 1984 to kill Sarah, John sends his friend and confidant Kyle Reese (Jai Courtney) back in time to save his mother. Just the way it has to be. But when Kyle arrives in 1984, he finds that something has completely messed up the course of time and that the future he came from no longer exists. What has happened? And can he still save Sarah Connor and the rest of humanity?

Terminator Genisys, now the fifth film in the franchise created over 30 years ago by James Cameron that made Arnold Schwarzenegger a superstar. The new part should shuffle the cards completely new. To do so, director Alan Taylor (Thor: The Dark Kingdom) first goes back to the beginning. As with the first three films, there is again at the beginning a look into the dark future, but this time it is a little longer. Then it's back to 1984, with some scenes from the original film recreated 1:1. But suddenly, the appearance of the T-1000 mixes it all up into a sort of best-of of parts 1 and 2, only to then turn the concept of the films completely on its head.

Here, though, the studio has laid an egg for itself. Instead of leaving it a surprise, one of the major twists is given away in the trailer. As a result, a longer sequence of the film completely loses its element of surprise and suspense. It's a shame, because even though this twist is kind of hare-brained, it's actually really well done in principle. From this moment on, the movie finally says goodbye to the flair of the first two Terminator movies and becomes a standard popcorn action cracker, which is fun, but just doesn't have much in common with Cameron's vision anymore. There is a surprising amount of humor and completely over-the-top action sequences that defy all laws of logic and gravity. When Arnold Schwarzenegger in particular, in view of his advanced age, displays a fair amount of self-irony, then it is amusing, but has little to do with his Terminator.

Who can make friends with this, who gets here at least entertaining entertainment cinema for the eye. And then you can also confidently say that Schwarzenegger still does his thing really well. Less convincing are Jason Clarke as John Connor and Emilia Clarke as his mother Sarah. Sure, Emilia Clarke is the dream of sleepless nights for many boys and men since Game of Thrones. But she lacks the rough edges that Sarah Connor simply needs. Linda Hamilton was perfect in this role. And Clarke's Game of Thrones colleague Lena Headey, who played Sarah Connor in the TV version for two seasons, was also convincing as a tough fighter for long stretches. Clarke, on the other hand, just comes across as too cutesy to be believable as an action heroine.

Terminator Genisys is, on balance, total nonsense, of course. That goes for both the utterly muddled story and the action, which degenerates more and more into the cartoony towards the finale. But there's no denying that the movie is a lot of fun in a slightly trashy way. The two hours fly by and some of the gags are surprisingly funny. So if you're not expecting a Cameron-style Terminator, you're in for a solid entry in the series that is clearly superior to Parts 3 and 4 in many ways. And for that there is a clear: Worth seeing!