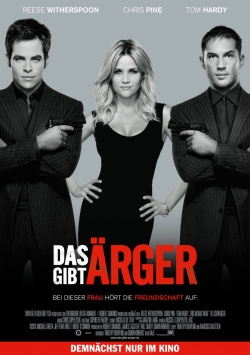 The name McG doesn't necessarily stand for highbrow, highbrow entertainment cinema. Directorial efforts like 3 Angels for Charlie and Terminator Salvation had some showmanship, but were rather soulless in content. Now McG, who is also a producer for popular TV series like Supernatural or Chuck, tries his hand at an action-comedy with a romantic touch. And even if here, too, should not be expected with depth of content or logic, the whole thing works pleasingly well.

In the center of Das gibt Ärger are the two CIA agents and best friends FDR Foster (Chris Pine) and Tuck (Tom Hardy), who have once again disregarded many a rule during their last mission and have therefore now been condemned to desk duty. Time to take care of the interpersonal issues for a change. And as luck would have it, Cupid hits both men right in the heart. Too bad the friends have a crush on the same woman, product tester Lauren (Reese Witherspoon). Since Lauren has no idea that her two admirers know each other, FDR and Tuck want to give her the choice and agree to vie for the favor of the beautiful Lauren by fair means. But of course, the two soon break the agreement, used all their charm and even CIA equipment to conquer the heart of the beloved. And it soon becomes clear: this is trouble...

This is pure fun cinema. This isn't about carefully crafted characters, in-depth dialogue, or even comprehensible logic. This is solely about keeping the viewer thoroughly entertained for 90 minutes, and McG has really accomplished that mission satisfactorily. The few action sequences at the beginning and at the end of the film are staged in a fast-paced manner, but even in between there is not a moment of boredom. Because the love duel spy against spy is full of numerous amusing ideas that provide really good laughs again and again. Especially a scene on a paintball parkour is undoubtedly one of the comedic highlights of the film.

The fact that the film works is primarily due to the good chemistry between the lead actors. Chris Pine (Star Trek) and Tom Hardy (Inception, Dark Knight Rises) are seen as FDR and Tuck's close friendship, which adds to the entertainment value of the increasingly absurd duels. Like the two, Reese Witherspoon acts as the object of desire with obvious relish. Both in the more romantically adoring moments between Lauren and Tuck, and during the verbal skirmishes between her and FDR that crackle with sexual tension, viewers can definitely understand why this woman has turned the heads of two seasoned CIA agents.

Good, the villain embodied by Til Schweiger has turned out to be arguably one-dimensional, which is not due to Schweiger's motionless facial expressions, but simply to the stereotypically written role. The explosive finale also bristles a little too obviously at the laws of logic. But the film's fun factor is only marginally diminished by these and other minor flaws. This Gives Trouble is entertaining popcorn cinema with lots of amusing ideas, good-humored actors and some nice action interludes. A little bit romantic comedy, a little bit agent thriller and a lot of good mood - this is definitely no trouble, but just fun! Worth seeing!!

Cinema trailer for the movie "This is trouble (USA 2011)"
Loading the player ...