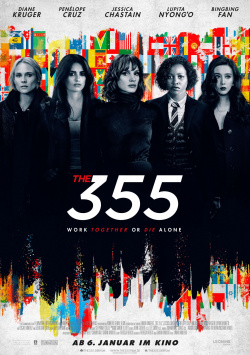 It's a small device that could plunge the world into bloody chaos. It is a cyber-weapon that is about to fall into the wrong hands. Of course, the world's intelligence agencies want to prevent that from happening. So CIA agent Mason Browne (Jessica Chastain) is also tasked with securing the device. When her partner (Sebastian Stan) is shot in the process, the matter becomes personal for Mason. But alone she will not be able to save the world. To do so, she must team up with her old friend, British tech specialist Khadijah (Lupita Nyong'o) and German agent Marie (Diane Kruger), accompanied by that of Colombian psychologist Graciela (Penélope Cruz), who is rather unwillingly drawn into the fight against evil. When the Chinese computer expert Lin mi Sheng (Bingbing Fan) also joins the mission, the agents with their different skills can definitely take on the bad guys - but how powerful their mysterious opponent is, the women do not yet suspect ...

Simon Kinberg, who celebrates great success as a producer, but as a director last with "X-Men: Dark Phoenix" rather disappointed, presents with "The 355" now an action film, which would have had quite the stuff for a real banger. The cast is great and also some of the action sequences are really well staged. Especially a scene at the beginning of the film, in which Mason and Marie deliver a chase through Paris, lets hope for the best popcorn entertainment. But unfortunately, the film can only conditionally keep what the beginning promises. It must be said quite clearly: It's not the fault of the leading actresses. They all do their best to give the film some class.

The biggest weakness of "The 355" is clearly the script, which is peppered with countless clichés and long-winded dialogues. As fast-paced as the action may be, it is repeatedly thwarted by extremely long-winded scenes. Even the big surprise, which is supposed to cause astonishment in the second half, is predictable from the beginning and thus can't prevent real boredom from arising again and again. Maybe it would have helped a bit if Kinberg was a better director. But he simply failed to iron out the weaknesses of the script, which he co-wrote with Theresa Rebeck, with a more fast-paced, atmospherically dense production.

It's not really bad entertainment with here. But it becomes obvious in almost every moment how much talent and potential has been burned here. The idea of bringing together a squad of female agents to save the world could have been really good, especially with this cast. As it is, however, the whole thing is nothing more than decent average with quite a few lengths - and that's really too bad. For this there is only one: With significant reductions still worth seeing!