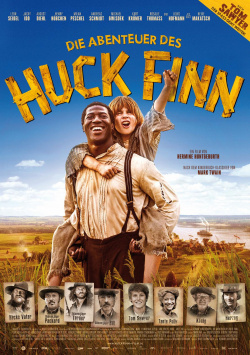 The Adventures of Huck Finn

Since surviving the adventure with his best friend Tom (Louis Hofmann) about the nasty Indian Joe and his secret treasure, life has never been the same for Huck Finn (Leon Seidel). Instead of living out in the open in his beloved barrel, Huck's newfound wealth now forces him to live a sedate life in the home of Widow Douglas (Margit Bendokat) and her bossy sister Miss Watson (Rosa Enskat). But the regular life soon comes to an end. Huck's money-grubbing father (August Diehl) shows up in St. Petersburg to seize his son's fortune. For Huck just the right time to leave the city. He joins Jim (Jacky Ido), a slave who wants to escape three nasty slave traders (Henry Hübchen, Milan Peschel, Andreas Schmidt) and flee to Ohio, where slavery is forbidden. But the road along the Mississippi is fraught with dangers that could bring the pair's escape to an untimely end.

With Tom Sawyer, Hermine Huntgeburth delivered a modern adaptation of Mark Twain's classic in 2011 that managed to look contemporary well, but still didn't pander too much to the young audience with put-on coolness. Tom Sawyer was a more classic adventure film whose great strengths were Benno Führmann as Indian Joe and the good chemistry between the two child actors Louis Hofmann and Leon Seidel. The Adventures of Huck Finn has to do without these two elements. Louis Hofmann only appears briefly at the beginning, after which he leaves the stage entirely to Leon Seidl and his adult co-stars. And it quickly becomes clear that this doesn't work nearly as well as the interplay between the two guys in the first part.

While the second film again has some successful aspects to offer. August Diehl is absolutely convincing as the unscrupulous drunkard, although he doesn't seem quite as menacing as Benno Führmann's Indian Joe. Also other actors like Rosalie Thomass or Kurt Krömer, leave a positive impression. What doesn't really work here, however, is the mixture of gloomy drama and far too silly comedy. The topic of slavery is treated quite drastically and not too trivialized. On the other hand, there are the three slave hunters, condemned to dull clowning, who are exposed to any silliness that presents itself in order to get a laugh from the young audience. This is quite amusing at times, but doesn't add up to a coherent overall picture. The director should have had the courage to approach the original with more seriousness - like the great German-Canadian TV adaptation from the late 70s did. The whole thing gets really annoying when Huck occasionally lapses into contemporary juvenile slang. Admittedly, this is well avoided over large parts of the film. But every now and then the boy is allowed to slip a cool or a word similarly inappropriate to the story, which further damages the already inconsistent overall picture.

It is a pity that of all things the story of Huck and Jim, which in itself is more interesting and exciting than that of Tom Sawyer and Indian Joe, is so watered down by unnecessary silliness. However lovingly and appropriately Tom Sawyer handled his original, the same cannot be said of The Adventures of Huck Finn. Kids who don't know the book and liked the first movie will certainly be able to enjoy this second installment. But those who expect a similarly good mix of suspense and rather affectionately charming humor that was still present in the predecessor will certainly want to throw themselves off the raft during this trip down the Mississippi. Therefore: only for big fans of the first film still worth seeing!

Cinema trailer for the movie "The Adventures of Huck Finn (Deutschland 2012)"
Loading the player ...