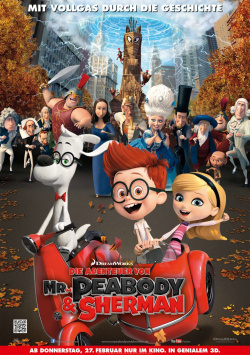 The Adventures of Mr. Peabody & Sherman

In the late 1950s, the clever beagle Mr. Peabody and his adopted son Sherman saw the light of the TV world as part of the popular cartoon series The Rocky and Bullwinkle Show, regularly traveling through time with their viewers to meet historically significant figures. History lessons of a particularly entertaining kind were offered in the cartoons, which quickly achieved cult status. Allusions to the time-travel duo were then also found in The Simpsons or in the hit movie Back to the Future. And even though the series has long since ceased to exist in its classic form, the popularity of Mr. Peabody and Sherman continues unabated. Now, the mismatched father-son duo has finally made it to the big screen.

Being the adopted son of a dog isn't always easy. Even though Mr. Peabody travels through time with him and has many exciting adventures, it doesn't save Sherman from being an outsider at his new school, teased by other kids. When the beastly Penny Petersen humiliates him in front of the whole school, the otherwise well-behaved boy snaps and bites. Miss Grunion from the Youth Welfare Office, who has long been frustrated by the fact that a dog has been allowed to adopt a little boy, has a field day with this. In order to mend fences and not lose Sherman, Mr. Peabody invites Penn and her parents to dinner. Unfortunately, the evening doesn't turn out the way the ingenious Mr. Peabody thought it would. To prove to Penny that he's not a crank, Sherman shows her the time machine and, despite his father's explicit prohibition, travels with her back to ancient Egypt, where they become separated. Now Sherman must confess to Mr. Peabody what he has done, for only the brilliant scientist can bring Penny back to the present. But even when, after an adventurous escape from a love-struck pharaoh, they manage to get the girl back to the Zeitomat, the adventure is far from over. On the contrary, when fuel runs low and doesn't last until the present, the turbulent time travel really gets going.

The Adventures of Mr. Peabody & Sherman attempts to wrap educational content in a turbulent animated adventure. The basic idea is a good one, and Lion King co-director Rob Minkoff manages to make it amusing and original in places. But overall, the many nice ideas are buried under a mountain of flat word jokes, hectic action sequences and an overdose of sugar coating at the end. You keep getting the feeling that the makers were afraid of overwhelming their young target audience with the humorous conveyance of history, which they tried to make up for with tiring rollercoaster effects. It's a shame that, at least since the advent of 3D, there's hardly an animated film left in which the heroes don't fall, slide or hurtle down somewhere at least once, accompanied by the obligatory Ahhhhhhhhh! There are just too many sequences like that here, which may be technically well-executed, but are a reason why any spark of charm is made to go out.

No question, there are some genuinely funny scenes in the film that not only kids can have a lot of fun with. But the endearing basic idea of the old cartoons has been so watered down here for an ADHD generation that it's hard to make out underneath the dominating hit-and-miss humor. Clearly, little moviegoers aren't trusted with enough smarts or attention span to present the whole thing a little more subtly and cleverly. It's not like the story is completely devoid of content and might not have some good, educational approaches. But since the overall motto for the production is rather faster, louder, more colorful, most of these successful approaches are completely lost.

Little animation fans will certainly not be bothered by this. They're guaranteed to find Mr. Peabody, Sherman and Penny's turbulent journey through time very funny and exciting. But that doesn't make The Adventures of Mr. Peabody & Sherman a really good movie. If you could laugh at movies like Cloudy with a Chance of Meatballs 2 or Madagascar 3 and aren't annoyed even when Sherman says Mr. Peabody for the thousandth time, you can still safely buy a ticket for this animated adventure. But if you're expecting more than clumsy sledgehammer humor and hectic, colorful goings-on, you'll want a time machine at the end that lets you travel back in time two hours to stop yourself from buying a movie ticket!

Cinema trailer for the movie "The Adventures of Mr. Peabody & Sherman (USA 2013)"
Loading the player ...