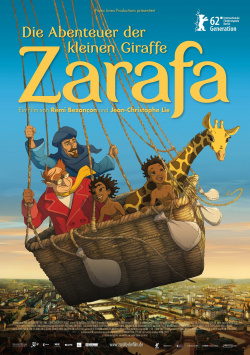 The Adventures of the Little Giraffe Zarafa

Somewhere in Africa, an old man sits under a baobab tree and tells a crowd of curious children a wondrous story. It is about the boy Maki, who was captured by the nasty slave trader Moreno after he burned Maki's home village to the ground. But the brave Maki manages to escape to a baobab tree where he is safe from Moreno and his guard dog. The next morning, the boy is awakened by a herd of giraffes. Maki quickly befriends the youngest member of the herd, the little giraffe Zarafa, and he decides to follow Zarafa and her family across the steppe. But Moreno continues to trail them, and when he catches up with Maki and the herd, Zarafa's mother is fatally shot by a shot from the slave trader's rifle. Although the stranger Hassan manages to scare Moreno away, he is unwilling to help Maki any further. Rather, he wants to take Zarafa as a gift for the King of France. But Maki is not so easily scared away, as he has sworn to Zarafa after the death of her mother that he will never leave the little giraffe alone again. And so begins a great adventure that will take Zarafa, Maki and Hassan far across the sea to Europe...

The Adventures of Zarafa the Little Giraffe is a very traditional animated film. Director Rémi Bezancon, who previously enjoyed success with the tragicomic family drama C`est la vie - So sind wir, so ist das Leben, has teamed up with veteran animation director Jean-Christophe Lie to direct a thrilling adventure inspired by the first giraffe at the Paris Zoo, which caused quite a stir there in 1827. The film is filled with exciting and humorous moments, while also delivering important moral messages throughout. Thus, the creators try to convey to their little viewers in a child-friendly way that death is a part of life, the importance of friendship and trust, and that mutual tolerance is imperative for any form of society.

Eight animation studios around the world worked on the project between 2009 and 2011, for which more than 150,000 drawings had to be made. The effort paid off. Because even if the film with its classic animation form eludes the viewing habits of children accustomed to computer animation, it radiates much more warmth and feeling than many other, technically perhaps more perfectly implemented animated film. Maybe that's the nostalgic in me, but it's just nice that this form of animation hasn't died out yet.

As for the story itself, it's perhaps a little too moralistic and pedagogical at times, with the fun falling a little by the wayside. Children can only rarely laugh heartily here. The film should therefore be seen as classic storytelling rather than modern animated entertainment. This is something you have to get used to first, since animated films for the very young are usually filled with fast cuts and relatively fast-paced action. But if you manage to get your children excited about such an animated adventure, you will be rewarded with a very warmly told and lovingly realized animated film, which could inspire 1.5 million viewers in Frankfurt. Worth seeing

Cinema trailer for the movie "The Adventures of the Little Giraffe Zarafa (Frankreich/Belgien 2011)"
Loading the player ...