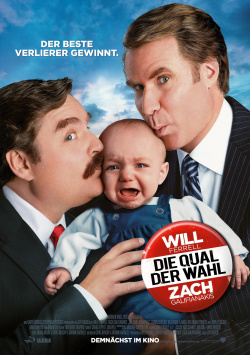 The agony of choice

The battle for the presidential election in the US is in full swing at the moment. And when you look at what's going on there, from embarrassing videos to awkward phrase-mongering to all-too-obvious pandering to the electorate, you can understand all too well why this campaign is pure gold for comedians in the US. For late night shows and comedy formats like The Daily Show, Obama's opponent Mitt Romney in particular provides new fodder of a particularly hilarious kind on an almost daily basis. So a comedy like The Agony of Choice by Austin Powers director Jay Roach, despite its over-the-topness and unrestrained silliness, almost feels like a documentary record of the times.

The comedy is set in North Carolina, where Congressman Cam Brady (Will Ferrell) is confident of his re-election despite a sex scandal. After all, in his political career, he's never faced an opposing candidate in the constituency. But now the filthy rich Motch brothers (Dan Aykroyd and John Lithgow), who have always supported Brady, are fed up and decide to send the naive Marty Huggins (Zach Galifianakis) into the race. With him, the influential businessmen are sure that they can get him through the election campaign without scandal and after a victory completely for their purposes. And indeed, the election campaign quickly develops into a real neck-and-neck race, in which even the normally good-natured Marty increasingly uses immoral means. And so a mud fight starts, in which there can be only one big loser in the end: the voters!

In The Agony of Choice no profound political satire should be expected. The film is a typical Will Ferrell comedy, with all sorts of raunchy dialogue, sex jokes and simply delivered slapstick. It's less Wag the Dog and a lot more Ricky Bobby. But Jay Roach and his two screenwriters, Chris Henchy and Shawn Harwell, cleverly use the crude-comedy underpinnings to dish out some deftly executed sideswipes at the American political circus behind the rather flat facade. And when those swipes do hit, they hit the bullseye. It's not particularly subtle most of the time, but it's still extremely effective, especially from a comedic standpoint.

For example, the two Motch brothers certainly bear a strong resemblance, not entirely coincidentally, to the infamous Koch brothers, who are big supporters of the libertarian-conservative Tea Party movement, and Cam Brady's execution during the first speech duel of how he would ensure that more jobs could be brought back to the region is so close to reality that you don't know whether to laugh, or cry. And even scenes like the one where Marty is called a communist for not owning American dogs could actually happen like this in certain regions of the U.S., unfortunately.

Often the best gags are hidden in little subordinate clauses, but sometimes it's the brute humor that makes for extremely good laughs. Cam's handsy encounter with a baby is certainly one of the comedic highlights of a film that, overall, could have happily done without some of the zaniness and instead devoted more time to the satirical aspect of comedy. Because here, at least in the original English version on which this review is based, the film can fully convince. As a pure entertainment film, however, there are too many humorous low blows, despite the wonderfully overacted actors and some very funny gags, to be able to achieve a clear point victory. Thus, The Agony of Choice can only be recommended to viewers who love Will Ferrell's brute humor on the one hand, and who appreciate intelligent political satire on the other. Who counts himself to this group, it will not regret to give this film his vote. Worth seeing

Cinema trailer for the movie "The agony of choice (USA 2012)"
Loading the player ...