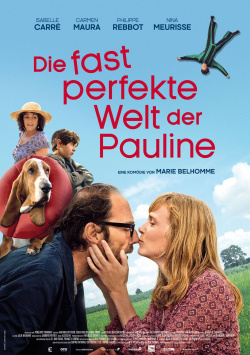 The Almost Perfect World of Pauline

Pauline (Isabelle Carr&eacute;) leads a less than normal life: She shares her apartment with a mouse and makes her living as a solo entertainer. When the slightly chaotic woman gets lost one day in a Darth Vader costume on her way from a child's birthday party to a senior citizen's party, she scares the man she's trying to ask for directions so badly that he falls into a pit. After calling an ambulance, Pauline flees the scene of the accident, but is so wracked with remorse that she later visits the man in the hospital. The sight of the man lying in a coma throws Pauline completely off course. In her attempts to make amends for what she has done, she becomes more and more immersed in the strange man's life and suddenly discovers desires she had no idea she even had until now.

Pauline's almost perfect world feels a bit like a cross between the fabulous world of Am&eacute;lie and the Hollywood romance While You Were Sleeping. Pauline is a character that can only work in French cinema: Chaotic, dreamy, and with all her quirks still somehow endearing. There's a certain charm to that, but it's really nothing new anymore. Because since Am&eacute;lie, there have been numerous female imitators vying for the audience's favor in playful, crazy romances. Isabelle Carr&eacute;, who has played a not entirely dissimilar character before in the likeable comedy The Anonymous Romantics, is perfect casting for the role of the somewhat bumbling Pauline. But despite her very engaging performance and charming manner, she fails to give her character a very special touch.

This may also be due to the staging of newcomer director Marie Belhomme. In her feature film, she tries too hard to be quirky and original and ultimately fails in her lofty ambitions. Every now and then her comedic talent flashes, but overall her direction still lacks the necessary finesse that could have turned this nice story into something special. So the whole thing is entertaining, very amusing at some points and obviously has its heart in the right place. But a really lasting impression can not leave the comedy unfortunately.

So some in the core good ideas fizzle out at the end in nothing and the finale comes too rushed and therefore also implausible. A few more minutes for a better polished ending would have done the film a lot of good. But even though The Almost Perfect World of Pauline has some obvious weaknesses and in the end doesn't offer much more than (in the most positive sense of the word) nice entertainment, lovers of small, somewhat offbeat romantic comedies from France will definitely get their money's worth here. And that's why the bottom line is an absolutely deserved: Worth seeing!

Cinema trailer for the movie "The Almost Perfect World of Pauline (Frankreich 2015)"
Loading the player ...