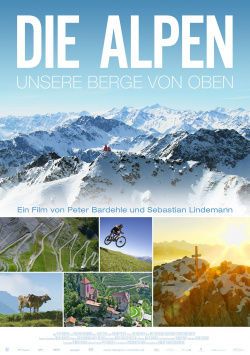 The Alps - Our Mountains from Above

Who would like to get to know the different sides of Germany with all its flora and fauna, which had the opportunity to do so in recent months in the cinema several times. Whether Unser Wald (Our Forest), Bavaria, Deutschland von oben (Germany from above), Die Nordsee (The North Sea) or Die Ostsee von oben (The Baltic Sea from above), everywhere the viewer was given an understanding of Germany's many facets (and those of neighbouring countries) in fascinating images. Now, in the same vein, another visually stunning documentary has been released, focusing on the Alps.

The Alps - Our Mountains from Above is the latest work from the makers of The North Sea from Above. Accompanied by the calm voice of Tatort actor Udo Wachtveitl, the film takes its viewers on a fascinating journey over the Dolomites, the Allgäu, Mont Blanc or the landscape around King Ludwig's Linderhof Castle. However, the introduction to this sometimes really overwhelmingly beautiful tour is chosen somewhat unfortunate. Because the makers drag the viewer down right at the beginning with very gloomy future prospects for nature and man in the mountain regions due to the rapid melting of the glaciers. Surely, a movie about the Alps can't do without mentioning this problem. Nevertheless, it would have been more beneficial for the enjoyment of this film if this rather pessimistic part had been postponed to the last third.

This is not to say, of course, that the film is not worth seeing. The images captured with the Cineflex camera developed by the US Secret Service are truly magnificent. The team around the directors Peter Bardehle and Sebastian Lindemann has done a first-class job. Especially the differences between natural regions and such places, where man has left very clear traces, are of a very special fascination. The film is not only simply beautiful to look at, but is also extremely interesting, on which, however, could have been built a little more.

The only problem, from which the documentary really has to suffer, is the mass of comparable works that have been seen in recent years in the cinema and TV. As beautiful as the images are to look at, as a viewer you never feel like you're watching something truly new. The market for such works just seems to be oversaturated, which unfortunately can't be helped by the high quality of such a production. So in the end we can only hope that this visually stunning journey across the Alps will get the attention it deserves. Because despite the somewhat unsuccessful beginning and some small lengths, the makers have succeeded in a really great documentary, which has more than earned the predicate worth seeing!

Cinema trailer for the movie "The Alps - Our Mountains from Above (Deutschland 2013)"
Loading the player ...