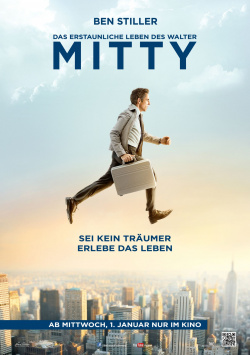 The Amazing Life of Walter Mitty

Traveling to foreign countries and experiencing real adventures are things Walter Mitty (Ben Stiller) can only dream of. Day after day, his work as photo editor of LIFE magazine confronts him with spectacular images that invite him straight to lose himself in daydreams. There, even an average everyman like Walter is an intrepid adventurer who faces every danger and thus also takes the heart of his adored colleague Cheryl (Kirsten Wiig) by storm. But reality for Walter is nowhere near as exciting. He does his job in secret and doesn't dare talk to Cheryl either. And then he is threatened with losing his job when the print edition of LIFE magazine is discontinued. A photograph by the legendary photographer Sean O'Connell (Sean Penn), which is to grace the cover of the last issue of LIFE, could still save his neck. But of all things, this negative is missing. Walter has little time to find globetrotter O`Connell and thus the picture. But to do so, he must leave his gray everyday life and embark on a real adventure - an adventure that rivals his exciting daydreams!

The Amazing Life of Walter Mitty is already the second big-screen adaptation of James Thurber's popular 1939 short story Walter Mitty's Secret Life, but Ben Stiller's version of the mere two-and-a-half-pager is not a remake of the 1947 film The Double Life of Mr. Mitty, starring Danny Kaye. Rather, Stiller delivers his own interpretation of the story. The screenplay by Steve Conrad (The Pursuit of Happiness) doesn't just tell the story of a man who escapes from his daydream-driven daily life into a real adventure. It's also a story about the end of legendary print media and a declaration of love for the power of photography.

Whoever now automatically thinks of uninhibited silliness in the style of Zoolander, My Bride, Her Father and I or Crazy for Mary when they hear the name Ben Stiller is in for a real surprise. It's true that the film is carried by humor for long stretches, which comes across a bit clamorous here and there. But all in all, Stiller strikes a much calmer note in his first feature film direction in five years, which comes across as very subtle here and there. At such moments, the film invites the audience to dream along with Walter Mitty and lose themselves in his amazing life. These quieter moments are repeatedly interrupted by small action interludes, which fit surprisingly well into the overall picture. True, the staging overshoots the mark a bit in one scene in particular, and here and there one wishes Stiller had used his good knack for poetic visual aesthetics a bit more boldly.

But that is truly complaining on a high level in the case of this wonderful comedy. For The Amazing Life of Walter Mitty is an extremely likeable, inventive, endearing and amusing work that makes its viewers laugh and dream. And along the way, the film also conveys the beautiful message that change, no matter how hard it may be, always holds an opportunity for something new and maybe even better. That this turned out so entertaining and worth watching is not only due to Stiller's fine direction, but also to the acting performances he and his co-stars put on.

While Adam Scott (Parks & Recreation, Piranha 3D) makes a wonderfully smarmy creep, Kirsten Wiig (Bridal Alarm) is truly fall in love with her very understated performance. Shirley MacLaine as a lovably quirky mother, Sean Penn as a mysterious photographer or &Oacute;lafur Darri &Oacute;lafsson (Contraband) as a heartbroken helicopter pilot also ensure that the film is fully convincing in terms of acting. The most positive surprise, however, is Stiller himself, who keeps a very calm demeanor, giving his co-stars ample room to develop, while at the same time being able to carry the story all by himself at crucial moments. The fact that he largely forgoes the kind of humor that makes him so popular with his fans might not sit too well with some viewers. But for the film, it's the best decision Stiller could have made.

For it was the only way The Amazing Life of Walter Mitty could become exactly the beautiful cinematic tale it has become. If you're more of a sucker for the crude, punch-up humor of other Stiller films, you're probably not going to do as much with this comedy. For those who like it a bit more restrained, but are not completely averse to the one or other silliness, here are two hours of wonderful escape from reality, which is nice to look at, offers a few really good laughs and at the same time really goes to the heart. And for that there is a more than deserved: Absolutely worth seeing!

Cinema trailer for the movie "The Amazing Life of Walter Mitty (USA 2013)"
Loading the player ...