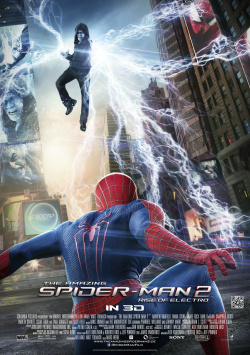 The Amazing Spider-Man 2: Rise of Electro

The fact that 2012's The Amazing Spider-Man, the next reboot of the Spider-Man story, hit theaters just five years after the end of Sam Raimi's successful superhero trilogy, was not only met with approval from fans and critics. To be sure, Marc Webb created an inherently good Spidy movie. But even if he has tried to win a few new sides of the story, the whole thing seemed too familiar to be able to really inspire. But this hardly harmed the success of the film. With a worldwide box office of almost 750 million dollars, the reboot was not quite as successful as Raimi's films. Still, the whole thing was a good foundation on which to now build a strong and more successful franchise. And so it's little surprise then that Part 2 of The Amazing Spider-Man series is now more obviously going its own way, and can offer both old and new fans an exciting and entertaining adventure - as long as the expectations are right.

In The Amazing Spider-Man 2: Rise of Electro, Peter Paker (Andrew Garfield) is still struggling with the memories of the events from the first film. Actually, he might just enjoy doing good as a superhero and being admired by people. And everything is going great in his relationship with Gwen (Emma Stone) as well. But the promise he made to her dying father and the secret about his own parents' past hang over Peter like a dark shadow. Peter has to realize how closely his personal problems are connected with the dangers for the inhabitants of New York, when his old friend Harry Osborn (Dane DeHaan) shows up, who desperately needs Spider-Man's blood and when the creepy Electro (Jamie Foxx) also makes the city unsafe. Because Peter's father, as well as Gwen, Electro and Harry, all have one thing in common: a direct connection to OsCorp, and it's only here that Peter will find the answers to all of his questions - but the price is pretty damn high.

For The Amazing Spider-Man 2: Rise of Electro, a very aggressive marketing campaign was launched, with numerous trailers and clips placing a particular emphasis on the film's action. While some feared a completely overloaded comic book romp as a result, the trailers heightened others' anticipation for some cool non-stop action. The latter could be rather disappointed by their expectations of this in itself very successful sequel. For much of the film is more concerned with Peter Parker, his relationship with Gwen and the search for the truth about his parents, than with Spider-Man's fight against bad guys. If you're already sour on the word romance, you might roll your eyes in annoyance at some of the scenes here. That would be a shame, though, because Webb has good reasons for why he's making this aspect of the story the focus of this second film. What they are, of course, will not be revealed here, but this much can be given away: Peter Parker has to experience and witness everything that happens in The Amazing Spider-Man 2: Rise of Electro in order for Spider-Man to become who he ends up being.

The good-time hero, who still garnishes his fighting gangsters with a cool one-liner at the beginning, may be fitting for a teenager who just found out he has superpowers. But in order to handle the tasks that lie ahead, Peter must realize the extent of his abilities and the responsibility that comes with them. The path Webb has him take to get there is just not only lined with events that will challenge him physically, but especially those that will shape his character, take away his youthful lightheartedness, and make him a somewhat darker, but more interesting character for the audience. How much this is accomplished, however, can only be guessed at the end and will only be revealed in the later installments.

Naturally, though, The Amazing Spider-Man 2: Rise of Electro is not a long-winded character study. Because even though there are many scenes that are carried by dialogue rather than action, it still doesn't come up short. Even the opening sequence, which reveals more about the fate of Richard (Campbell Scott) and Mary Parker (Embeth Davidtz), gets the audience's adrenaline pumping. And when Spidy swings through the streets of New York on top of that to ruin the future Rhino Aleksei Sytsevich's (Paul Giamatti) explosive heist, the pace is extremely involving. The appearance of Electro and the grand finale with the Green Goblin also ensure that action fans will get their money's worth here.

Which brings us to the film's villains. While Rhino only plays a very small role and actually only appears briefly in the last few minutes, Electro and Green Goblin make life quite difficult for the Spider-Man. Now you could criticize that especially Green Goblin comes a bit too short and also Electro wasn't used to his full potential as an interesting villain. And even if that might be true, Marc Webb succeeded very well in giving both characters a complexity that makes them not interchangeable evil, but almost tragic characters. Both the very intense acting Dane DeHaan (Chronicle), as well as a wonderfully balancing on the edge of madness Jamie Foxx really get everything out of their roles. And it's then this good acting from both actors that adds to the impression that you would have liked to have seen more of Electro and Green Goblin.

As a sequel, The Amazing Spider-Man 2: Rise of Electro is a winner all the way around. The characters and story are developed quite significantly, and the quality of the action and special effects are also a noticeable step up from its predecessor. However, it has to be said that all Spider-Man fans who couldn't get along with Andrew Garfield's first appearance as the legendary Marvel hero will hardly break out in raptures with this second part. For that, director Webb continues too consistently on the path he took in part 1, both stylistically and dramaturgically. But if you liked The Amazing Spider-Man, you should definitely not miss this better sequel. Because despite minor weaknesses here is quite great popcorn cinema. And for this there is a very clear: Absolutely worth seeing!

Cinema trailer for the movie "The Amazing Spider-Man 2: Rise of Electro (USA 2014)"
Loading the player ...