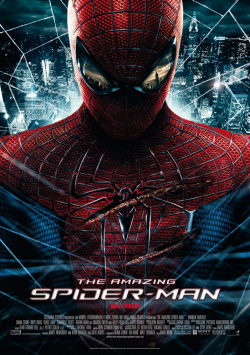 It's been just five years since Sam Raimi brought his third and final Spider-Man film to theaters. By now, one should really assume that the successful series, which has grossed nearly $2.5 billion at the worldwide box office, will now continue with another sequel. But sometimes the decisions made by the studio bosses in Hollywood are not really comprehensible for the normal cinema fan. And so many a Spidy fan scratched their heads in surprise when not a fourth installment, but a reboot, i.e. a complete new start to the series, was announced.

The Amazing Spider-Man takes a slightly different approach to the creation of the legendary superhero, even if the core of the story is the same as that told by Sam Raimi in his first Spider-Man film from 2002. Since the death of his parents, high school student Peter Parker (Andrew Garfield) has been living with his Uncle Ben (Martin Sheen) and Aunt May (Sally Field). Preferring science and photography to parties and football, Peter has long since come to terms with his role as an outsider as well as the fact that he can only idolize a girl like Gwen Stacy (Emma Stone) from afar. But all that changes abruptly one day when Peter finds his father's (Campbell Scott) old briefcase, which contains secret research papers that lead Peter to Dr. Curt Conners (Rhys Ifans), his father's former colleague. When Peter is bitten by a genetically engineered spider while snooping around the corporate Oscorp labs, not only does his body change, but his life changes drastically. And soon Peter Parker, as Spider-Man, is confronted with his first dangerous foe...

Director Marc Webb, who last wowed with the wonderfully unromantic romantic comedy (500) Days of Summer, also leaves a very good impression with this expensive comic book adaptation. What starts quite slow and humorous, turns more and more into a straight action spectacle, which can convince not only with decent effects, but also with well-developed characters and convincingly acting actors. Even if the film contains some familiar story elements, such as the violent death of Uncle Ben combined with Peter's desire for revenge, Webb goes completely new ways in many other aspects. Perhaps the most noticeable difference from Raimi's Spider-Man is the character of Peter Parker. While he is an outsider in both versions, with Webb this is his own choice. Even when teased or even beaten by classmates, Parker endures it with a great deal of self-confidence. He faces life and its problems with a fair amount of irony and cynicism, which increases dangerously after he gets his superpowers. The fact that this has dramatic consequences makes Peter a really interesting character, especially after the very light-hearted beginning, and Andrew Garfield (Boy A, The Social Network) does a first-rate job embodying him. As much as I liked Sam Raimi's Spider-Man and Tobey Maguire's Peter Parker, it's fair to say right now that Garfield is at least the more interesting Spider-Man.

At the same time, this characterization of Peter Parker also makes it clear why Gwen Stacy, charmingly played by Emma Stone (The Help) falls in love with him before she learns of his secret identity as a masked savior. As coherent as the chemistry between Maguire and Mary Jane Watson, played by Kirsten Dunst, has been in the previous three Spider-Man films, there was always a lingering feeling that MJ at least fell in love with Spider-Man first and Peter second. Here, on the other hand, a more intense relationship is established, making one very specific moment near the end of the film - which, of course, shall not be given away here - all the more effective and emotional.

Also well done is the film's villain, who, strictly speaking, isn't really one at all. Dr. Curt Conners aka The Lizard is more of a tragic figure whose actions, which turn the scientist into a lizard-like monster, are quite understandable. However, that doesn't rob this monstrous figure of his menace. On the contrary, since his motivations are primarily personal and his mind is clouded by what he sees as a successful experiment, there is a very special intensity to his actions that make The Lizard quite the dangerous opponent for Spider-Man.

With partly very good special effects, which work in 3D, but do not necessarily need the three-dimensional additional effect, a neatly built dramaturgy, a good portion of humor and suspense, as well as great supporting actors like Martin Sheen and Denis Leary, Marc Webb has succeeded in a really good superhero movie, which offers the best popcorn entertainment, without completely losing sight of the character development. Whether this reboot was really necessary is an open question. That the film is nevertheless extremely entertaining and really good, however, is completely out of the question! Worth seeing!

Cinema trailer for the movie "The Amazing Spider-Man (USA 2012)"
Loading the player ...