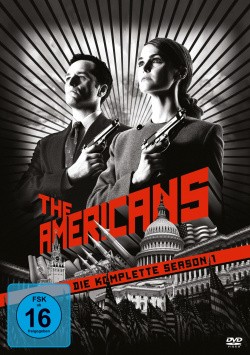 The Americans - The Complete Season 1 -DVD

Movie: The USA in the 1980s, the era of Ronald Reagan and the Cold War: here, married couple Phil (Matthew Rhys) and Elizabeth Jennings (Keri Russell) and their two children Paige (Holly Taylor) and Henry (Keidrich Sellati) lead a normal life in a suburban settlement near Washington DC. But Phil and Elizabeth are not the model Americans they pretend to be on the outside. The two are Russian KGB spies who were recruited in the 1960s to run a spy ring in the US. And they've been doing it so well for so many years now that no one suspects a thing - not even their children. But then events come to a head: the kidnapping of former KGB agent Timoshev goes badly wrong, costing the life of not only an ally but also the traitor. Not a good time for Phil to think about defecting himself. And if that wasn't bad enough, Stan (Noah Emmerich), the Jennings' new neighbor, turns out to be an FBI agent working for Counterintelligence. Then, when an attempt is made on President Reagan's life, the situation finally comes to a head and the air becomes dangerously thin for Phil and Elizabeth. But from whom is the greater danger for the two? From the American Secret Service or from their own people?

With The Americans series creator Joseph Weisberg has landed a real bull's eye. Together with experienced producers like Graham Yost (Justified) or Darryl Frank (Falling Skies) and excellent writers like Joshua Brand (Alaska of all things) or Joel Fields (Rizzoli & Isles), the former CIA agent has created a gripping mixture of political thriller and drama from the first scene on, which largely renounces the usual black and white painting and blurs the lines between good and evil. Phil and Elizabeth are spies, they lie to their own children and sometimes have to kill for their beliefs. These are not exactly qualities that are made into great sympathetic characters. And yet, the creators do an excellent job of delving so deeply into the conflicted nature of the characters and revealing their motivations that a much more layered character sketch emerges here, this just doesn't allow you to immediately label the couple as the bad guys.

The same goes for FBI agent Stan. To make the main characters Phil and Elizabeth seem more sympathetic, it would have been easy to portray the U.S. government, embodied by the agent and his colleagues, as the real villain. But again, the series just doesn't make it too easy. Stan, who spent three years undercover investigating the far-right before working for Counterintelligence, is a man with noble motives, but also with very dark sides. Like the two spies, his character walks somewhere on the line between good and evil, between right and wrong. Of course, there are also characters where the assignment is much easier. But the fact that the protagonists, who are at the center of the series, are portrayed rather ambivalent and can not be easily pressed into a category, makes the very special charm of the series.

Much tension also arises from the fact that the story is set in a time in which there was no rapid spread of information via the Internet and easy contact via mobile phone. Instead of relying on technology, the spies have to use their ingenuity - and that makes for some really exciting moments of suspense. In some scenes, these are then intensified by enormous brutality, such as in an episode in which Phil and Elizabeth are captured and tortured. An underlying atmosphere filled with paranoia and many well-constructed plot twists ensure that the series always remains engaging, even when the production itself takes on quieter tones at one point.

The Americans doesn't take long to get viewers hooked. A very well acted, coherently plotted and grippingly directed spy thriller, lovers of more challenging series entertainment should definitely not miss it. In anticipation of season 2, there is a very clear: Absolutely worth seeing!

Picture + Sound: The audiovisual implementation of the series corresponds to good to very good TV level on the DVD. The picture is absolutely clean and has good overall sharpness in most moments. Only in dark moments are there slight weaknesses in the detail and in faster camera pans are slight dragging effects noticeable. Otherwise, however, a good overall impression prevails, which the sound can also leave behind. The Dolby Digital 5.1 mix is pleasantly lively in the more action-packed scenes. In the quieter dialogue scenes, the actors' voices are transported out of the speakers with good intelligibility. All in all, this earns a more than satisfied: good!

Extras: The first three DVDs each contain deleted scenes (DVD 1: 6:59 min., DVD 2: 0:48 min., DVD 3: 4:07 min.). There are more extras on the last disc. Here, in addition to an audio commentary on the episode The Colonel by Joseph Weisberg, Joel Fields and Noah Emmerich, the viewer gets some outtakes (approx. 3:37 min.) as well as featurettes on the true background (approx. 12:47 min.), the research for the series (approx. 5:59 min.) and on the particular challenge of setting the series in the pre-Internet and cell phone era (approx. 4:54 min.). Very interesting and insightful bonus material, for which it gets a well-deserved Very Good!

Conclusion: The Americans is an extremely exciting series that perfectly understands how to blur the lines between good and evil. The first season offers thirteen episodes full of surprising plot twists, gripping paranoia and riveting spy thrills. Very well acted and superbly directed, this series is once again a good example of the high quality television currently has to offer in the area of series. The DVD box presents the episodes in good picture and sound quality and also has some interesting extras to offer. Absolutely recommendable!