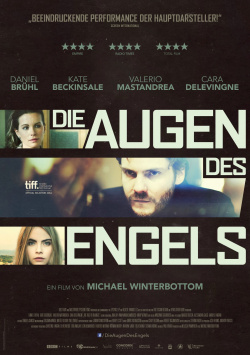 For a long time now, young director Thomas Lang (Daniel Brühl) has been searching for the perfect material for his new film. The sensational trial of American Jessica Fuller (Genevieve Gaunt), who is accused of murdering a British student in Sienna, seems perfect as a story for a film. With the help of journalist Simone Ford (Kate Beckinsale), who has written a book about the crime, Thomas wants to learn more about the case and go on location to follow the trial. But the research turns out to be more difficult than initially thought. The more the young filmmaker investigates the murder, the more he seems to slip into a world of lies, mistrust and manipulation. The fact that he can't come to any real conclusion to be able to structure his film clearly lets Thomas fall into a deep personal crisis. Only when he meets the young, fun-loving student Melanie (Cara Delevingne) does he find new motivation to continue working on the film...

The Angel's Eyes is loosely based on the case of American student Amanda Knox, who was accused of murdering British student Meredith Kercher in Italy. After a media-heavy trial, Knox was eventually acquitted at the last instance in 2015. Award-winning filmmaker Michael Winterbottom clearly refers to the Amanda Knox case in some aspects of his drama, but does not want his film to be understood as a retelling of real events. And his film is not a crime thriller either - even if the first third in particular may leave this impression. Rather, it is about the search for truth, about the role of the media in such a case and about the search for meaning of a disillusioned person.

And exactly here lies the problem of the film. As a viewer, you often get the feeling that the production itself doesn't quite know which direction it wants to go in, and that Winterbottom is too uptight in trying not to let his work degenerate into a rousing justice thriller under any circumstances. And so, just when things start to get exciting, he simply inserts long-winded moments that aren't really significant to the plot, nor are they particularly excitingly realized from an artistic standpoint.

In the second half especially, the story meanders indecisively from one scene to the next. This is well acted and often atmospherically filmed - but dramaturgically just often extremely inconsequential storytelling. As much as Daniel Brühl tries with his convincing performance, he can't prevent that The Eyes of the Angel, despite some very good moments and atmospheric images, has become very tedious program cinema fare, which is nowhere near as profound and multilayered as Michael Winterbottom probably had in mind. For this there is in the end only one: Conditionally worth seeing!

Cinema trailer for the movie "The Angel's Eyes (Großbritannien/Italien/Spanien 2014)"
Loading the player ...