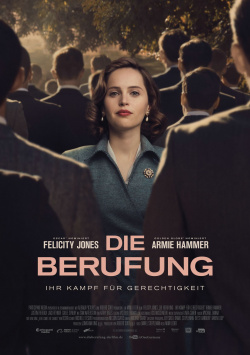 The Appeal - Her Fight for Justice

The USA in the 1950s: women's rights are not yet far behind. Young Ruth Bader Ginsburg (Felicity Jones) has to experience this first hand when she is admitted as one of the few women to study law at Harvard University, but has to fight far harder for her successful graduation than her male fellow students. However, not least due to the support of her husband Marty (Armie Hammer), she does not let it get her down and manages to graduate. Still, she can't get a job as a lawyer in the male-dominated world and has to settle for a law professorship. But then she becomes aware of the case of a man who, because of his gender, is not granted the usual tax rebate to care for his sick mother. Ruth sees this as an opportunity to change a completely outdated set of laws and begins a passionate fight against discrimination that will make history.

The Appeal - Her Fight for Justice traces the beginning of Ruth Bader Ginsburg's fight for justice that will take her all the way to the Supreme Court, the U.S. Supreme Court, later in her life. Ginsburg is still active there at the ripe old age of over 85, and for many Americans is an indispensable counterweight to the conservative majority among the justices. In recent years, she has truly risen to pop icon status, especially for young people, and is the kind of role model that is becoming increasingly rare. Her work, her life and her professional rise was portrayed a few months ago in the Oscar-nominated documentary RBG - A Life for Justice. There's really no need for this very conventional dramaturgical adaptation.

Even more so since Mimi Leder's film gets some things wrong. Sure, these are all dramaturgical liberties that don't necessarily minimize the outcome of this remarkable woman's uphill battle. But when you see original footage in the documentary of the trial that is reenacted here, and realize the confidence and determination with which Ginsburg outwardly performed even then, this film version simply cannot be called successful. Here she is often insecure, nervously bumping into the microphone, and it is only with the encouragement of her husband and daughter that she is able to muster the courage to stand up to the dominance of men.

But that aside, The Appeal - Her Fight for Justice is not a bad film. It just doesn't really do justice to the person at the center of the story. Felicity Jones plays strong and also Armie Hammer can convince all along the line. The staging is low on surprises, but definitely rousing. And the message that is conveyed here in an admittedly somewhat shallow manner is unfortunately still very relevant and therefore important. Sure, Ruth Bader Ginsburg would have deserved a better movie - but she already has one with RBG - A Life for Justice. So you can overlook the small weaknesses of this courtroom drama and give the film a well-deserved "worth seeing" rating.

Cinema trailer for the movie "The Appeal - Her Fight for Justice (USA 2018)"
Loading the player ...