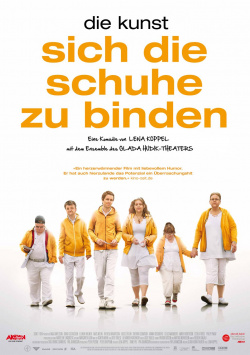 The Art of Tying Your Shoes

In the life of Alex (Sverrir Gudnason) everything seems to go wrong at the moment that can go wrong. First his dream of a career in the theatre falls apart and then his girlfriend Lisa (Cecilia Forss) dumps him. His only way out is his brother, who lives in the provincial town of Hudiksvall. But since his brother also makes it clear to him that Alex is only wanted here for a short time, he urgently needs to find a job. But the employment office has only one offer to make: A caretaker at the local home for the disabled. Since pay and accommodation are okay, Alex accepts the job despite his lack of experience and also clashes with his new colleague Hanna (Vanna Rosenberg) on the very first day, who demands punctuality and strict adherence to all rules from Alex. But he can't quite come to terms with the meaningless activities with which the handicapped seem to be sedated. He wants to give them the opportunity to discover something new and their own abilities. Slowly he makes friends with the six men and women he is supposed to look after and manages to sign them up for Sweden is looking for the Superstar against the resistance of their parents and his superiors. But after a promising start, the whole thing threatens to fall apart before it has even really begun...

The Art of Tying Your Own Shoes was the very big summer hit of 2011 in Sweden, where 400,000 visitors were enthralled by the warm-hearted story. The story is loosely based on the experiences of co-author Pär Johansson, who founded the Glada Hudik Theatre in 1996 as a caregiver for the disabled. The ensemble of the theatre for the disabled was recently able to thrill audiences not only in Sweden but also on Broadway in New York with the production ELVIS. Some of the actors from the theatre ensemble can now also be seen in this film, which retells their story in a somewhat very conventional way that is nevertheless worth seeing.

The fact that the focus is more on Alex's story of self-discovery does not detract from the film's impact. The interplay of Sverrir Gudnason as a charming loser who is desperate to learn responsibility in order to win back his girlfriend and be a good father to his child, with the disabled cast, is believable and very engaging. The fact that he becomes more mature and less self-centered through his work and later friendship with this small group is quite understandably built up. And the respectful friendship that slowly develops between him and Hanna is also one of the film's strong moments.

Admittedly, the dramaturgy is arguably predictable and the ending a bit thick. Still, it's hard not to get infected by the good mood that flows from the screen during the finale. And the fact that the whole thing is then also a very nice plea for the dismantling of prejudices and for a stronger togetherness of disabled and non-disabled people is another positive aspect that makes the film well worth watching, despite some lengths and the somewhat too cheesy ending!

Cinema trailer for the movie "The Art of Tying Your Shoes (Schweden 2011)"
Loading the player ...