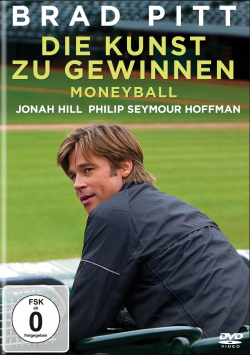 The Art of Winning - Moneyball - DVD

Film: Sports films generally have it rather hard in Germany. If then a typical American sport like baseball is the focus of the story, this further reduces the chances of success. But The Art of Winning - Moneyball is a good example for the fact that one should open oneself to such films, even if knowledge or even interest for the sport is missing. For the latest work of Capote director Bennett Miller offers just not only an interesting look behind the scenes of the baseball circus, but also quite great entertainment of the more intelligent kind.

Based on true events, the story of Billy Bane (Brad Pitt), who was once a great hope on the baseball field itself, but ultimately failed because of his own high expectations. Now Billy works as a manager for the Oakland A`s, who he is supposed to rescue from their financial woes and the failures that come with it. But all attempts to buy capable players are thwarted by the much richer teams. But Billy does not let himself be sidelined so quickly. Together with inexperienced Yale graduate Peter Brand (Jonah Hill), he wants to test a theory that players are selected based on computer statistics rather than their market value. In theory, they could assemble a winning team from all the players who are either injured, too old, or otherwise misfits. Against all reason and the will of the field manager (Philip Seymour Hoffman), Billy and Peter put their plan into action - initially with disastrous consequences. But unlike on the field, Peter doesn't want to give up so easily behind the scenes.

While The Art of Winning - Moneyball is about the American baseball league, what the film actually shows can easily be applied to other sports in other countries. The way players are gambled with, traded and sold with tactics and how their market value is determined is not a purely American phenomenon. But it simply wouldn't do justice to Bennett Miller's direction and Steven Zaillian's (Schindler's List) and Aaron Sorkin's (The Social Network) great screenplay to think of Moneyball as just a sports movie. Rather, the film is a story about values and appreciation, not only on a professional level, but most especially on a personal level. It's about discovering and promoting a person's true worth. And about believing in one's own strengths. Because only who succeeds in doing that, has actually understood the art of winning.

While the script seems to be crammed with great dialogues, it was now up to the actors to transfer them adequately to the screen. And the great ensemble really succeeded impressively. Especially Brad Pitt, who seems to stuff something to eat or drink into his mouth in every scene, is just great as a little cocky stubborn guy who tries to silence his inner demons with his sayings. That this earned an Oscar nomination is more than justified. The same goes for Jonah Hill, who after the huge success of Superbad seemed to be stuck with a very specific type of role. But here he gets to deliver a much more adult performance that, while it also has comedic traits, also reveals a lot of acting talent. But also supporting actors like a bald Philip Seymour Hoffman or Chris Pratt, known from series like Everwood, make the film a real home run in terms of acting.

The Art of Winning - Moneyball is entertainment cinema with brains, a drama with realsatirical features carried by dialogues and the actors, which once again proves that Hollywood can be much better than its reputation. Absolutely worth seeing!

Picture + Sound: High detail sharpness, natural coloring, well-matched black levels, all this makes the image of the DVD an all-round success. As for the sound, the focus is on the excellent dialogue, but every now and then the surround channels come into their own with coherently mixed ambient noise and minor sound effects. Good!

Extras: As a bonus, the DVD has three worth seeing cut scenes (about 11 minutes), an amusing slip of the tongue (about 3 minutes), as well as two short documentaries to offer. While the first deals with the real Billy Beane (approx. 15 min.), the second featurette is about the making of the baseball scenes and the effort to achieve a high level of authenticity in this aspect of the film (approx. 18 min.). Good!

Conclusion: The Art of Winning - Moneyball is a great sports movie that scores with plenty of comedic moments, wonderful dialogue, and great actors. Even if you have little or nothing to do with baseball, this movie offers the best entertainment at a high level. If you don't need a lot of action, but instead appreciate intelligent dialogues, you simply can't miss this drama. The DVD is technically well done, the bonus material is clear, but worth seeing! Therefore applies to this disc: absolutely recommendable!