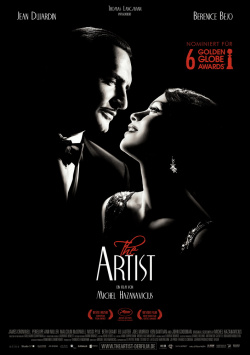 In modern entertainment cinema, one motto seems to dominate: faster, louder, more colorful - and preferably in 3D. So the decision to shoot a silent film in black and white seems downright crazy. But French director Michel Hazanavicius dared to try such an experiment and hit the mark with his film The Artist. One might think that he has presented a bulky arthouse work, which will be enjoyed at most by an intellectualized feuilleton audience. But far from it. The Artist is the best entertainment cinema with a lot of heart and humor, which challenges not only the intellect, but also the laughing muscles.

Told is the story of George Valentin (Jean Dujardin), the biggest star Hollywood has to offer in the 1920s. Female audiences in particular fall at the feet of the charmer. With the studio bosses he can therefore also take a lot out. For example, he makes sure that the young extra Peppy Miller (Bérénice Béjo) is allowed to step into the limelight. But then comes the big turn. The silent film is dead and the talkies and with them a new group of stars conquer the cinemas. Among them Peppy, who quickly becomes a celebrated star. George, on the other hand, falls more and more. His great successes are quickly forgotten, he is left by his wife, loses his house and his entire fortune. Only his faithful butler (James Cromwell) and his dog Jack remain loyal to him. But when he seems to have hit rock bottom, he has to realize that there is someone else who has not forgotten him: Peppy!

Already in the two agent parodies around the French super agent OSS 117 Jean Dujardin has been allowed to prove his comedic talent under the direction of Michel Hazanavicius. That he can use his versatile facial expressions and gestures perfectly, he has certainly proven. But if this would be enough to convince in a movie that only lives on these two factors was not a matter of course. Because The Artist presents all of its actors with the difficult challenge of acting without text, yet not using overly exaggerated gestures or completely unnatural facial expressions in order to convey the story. But Dujardin in particular masters this task with flying colors. His justifiably Golden Globe-winning and Oscar-nominated portrayal of the fallen movie star is nearly perfect, down to the tiniest nuances.

Among the supporting cast, in addition to the charming Bernice Bejo, who has already appeared on camera with Dujardin in the first OSS film, special mention should be made of James Cromwell as the loyal butler, who delivers such an endearing performance that it almost brings tears to one scene in particular. But the fact that The Artist works so well is not solely due to the actors and the director. There are also many other elements that play an important role, from the costumes to the music to the very endearing set, which is absolutely successful, especially in small details.

The audience is virtually forced by the lack of dialogue to get the information about the characters and their stories from elsewhere. And this is precisely where the set plays a significant role. It really pays to let your eyes glide over the entire picture at all times, because discovering all the little details that make this inherently colorless world seem so colorful and alive is just tremendous fun!

Of course, The Artist is first and foremost art cinema. The film simply goes against the viewing habits of the masses too much to appeal to mainstream audiences in addition to film buffs and arthouse cinema enthusiasts. But you shouldn't let that deter you. Reduced to its simplest, The Artist not only proves to be a wonderful declaration of love for cinema, the film also proves the impact a film can have when not dominated by special effects, 3D visuals and loud sound. Personally, I don't like silent movies very much, so I went into this movie with some reservations. But after a few minutes the production had me hooked, the story made me laugh and also brought a tear or two to my eye. Michael Hazanavicius has directed a film that is bold in its making and simply wonderful in its effect. And you should definitely see for yourself. Absolutely worth seeing!!!

Cinema trailer for the movie "The Artist (Frankreich 2011)"
Loading the player ...