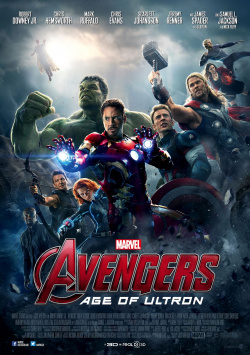 The Avengers: Age of Ultron

After their first screen appearance together three years ago grossed over $1.5 billion worldwide at the box office alone, the Avengers are now gathering for their second outing. A few years have passed since the alien attack on New York. Since then, Tony Stark (Robert Downey Jr.) aka Iron Man, Bruce Banner (Mark Ruffalo) aka Hulk, Thor (Chris Hemsworth), Captain America (Chris Evans), Black Widow (Scarlett Johansson), and Hawkeye (Jeremy Renner) have gone their separate ways. But for a big strike against Hydra, the superheroes team up again. And sure enough, they manage to steal a powerful weapon from the ruthless Baron von Strucker (Thomas Kretschmann). But there is not much time to celebrate. Tony decides on his own to use the alien technology he got from Hydra to complete the Ultron project he and Bruce Banner initiated. This artificial intelligence-based computer system is supposed to guarantee long-term peace for mankind and prevent alien attacks like the one on New York in the future. And indeed, Ultron develops his own consciousness - but differently than planned. Because Ultron sees the only way for guaranteed peace the extinction of mankind. And so the Avengers must once again combine all their forces to protect the world from an all-powerful enemy. But against Ultron, every superpower, no matter how powerful, seems ineffective...

How do you top the most successful superhero movie of all time? Not an easy task that director and screenwriter Joss Whedon faced with The Avengers: Age of Ultron. It wasn't so much about action and special effects. The biggest problem was in the interaction between the different superheroes. Because Part 1 drew a lot of its appeal from the fact that the heroes you already knew from their solo films were meeting here for the first time, and despite their sometimes very different mentalities and egos, they had to work together to put a powerful foe in his place. In the second film, the Avengers have long since become a well-rehearsed team - and it's just not quite as exciting as the first time they got to know each other.

This seems to have been something Joss Whedon was aware of, though. And so he doesn't even try to copy the successful formula of the first part. Rather, he consistently develops it further, which gives the second film from the outset, a somewhat different, dark undertone. The fact that the movie starts with a spectacular action sequence right away seems like a disadvantage at first glance. Because instead of a well-structured build-up of the new story, countless effects and fast cuts are immediately pounded into the viewer, which can definitely seem a bit exhausting - especially if you've opted for the 3D version. But if you're worried after this opening sequence that The Avengers: Age of Ultron will degenerate into mindless action overkill in the style of the Transformers movies, rest assured: Joss Whedon knows exactly what he's doing.

Because after that fast-paced opening, he takes enough time to build up a story that's punctuated every now and then by a few effects-laden action sequences, but ultimately builds purposefully toward a dramatic confrontation between the Avengers and Ultron. There are a few surprises along the way, which of course won't be given away here. Just so much: even if the fun factor is not quite as high as in part 1, especially the spectacular finale reveals once again that Joss Whedon is simply the perfect director for such a major project. He perfectly directs the individual heroes through the battle scenario, lets each character play to their strengths and always finds time for some emotional moments or humorous interludes. Especially the dialogues peppered with a lot of dry wit make some scenes really successful.

The new characters - whether Ultron (wonderfully voiced by James Spader in the English original), Quicksilver (Aaron Taylor-Johnson), Scarlet Witch (Elizabeth Olsen) or Vision (Paul Bettany) - are not quite given as much room to develop as the individual Avengers. And even popular characters like Nick Fury (Samuel L. Jackson) or Dr. Erik Selvig (Stellan Skarsgård) have to make do with fairly brief appearances this time around. Still, all the characters seem pleasantly fleshed out and none of the guest appearances (like Idris Elba's second guest appearance), no matter how brief, seem forced or unnecessary. As in the first film, Whedon again lets many small gears mesh perfectly, so that in the end a coherently functioning whole.

Some wonderful running gags, a pleasant touch of self-irony, a surprising, very nice romance, many great show values and the very successful last act then also console over the fact that the charm of the new is missing this time. However, it also has to be said that the film as a whole feels very distinctly like the middle installment of a trilogy. There is no real prologue, as the viewer is thrust straight into the action. And even the ending is relatively open-ended, despite some closure, as it becomes clear that the very big danger is yet to come for the Avengers. As a result, The Avengers: Age of Ultron has a relatively hard time standing on its own. However, in the context of the first part and all previous (and certainly future) standalone films of Captain America, Thor and co. there is a very clear conclusion for this second superhero run-up: a very big pleasure that more than satisfies fans. Certainly not the best Marvel film, but definitely one of the upper third! Absolutely worth seeing!

Cinema trailer for the movie "The Avengers: Age of Ultron (USA 2015)"
Loading the player ...