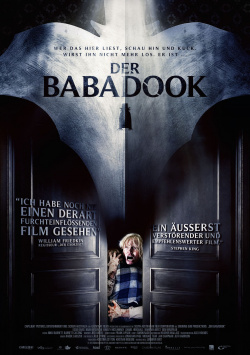 Trying to return to normalcy after the death of her husband is not made easy for young nurse Amelia (Essie Davis), even after seven years. Her son Samuel's (Noah Wiseman) erratic behavior in particular is giving the widow sleepless nights. The boy complains of nightmares, behaves so aggressively towards other children that he is expelled from school and even Amelia's sister is no longer willing to help her after another outburst by the boy. Amelia is at her wits' end, especially as Samuel stiffly claims to be haunted night after night by the monster from the children's book The Babadook. What she initially blames on his childish imagination is creeping more and more into her own life as well. And after the creepy occurrences in her house accumulate Amelia is sure: The Babadook is real - and he's out to get her and her son...

Based on her 2005 short film Monster, filmmaker Jennifer Kent has delivered an extremely atmospheric creepy thriller with The Babadook, which has wowed at various festivals and won over such prominent fans as Stephen King and William The Exorcist Friedkin. The very special charm of the film lies in its very quiet narrative, which does without the usual shock effects at the beginning. The horror creeps into the film slowly, almost unnoticed. Which is not to say that at the beginning everything is all sunshine and roses. On the contrary, from the very beginning there is a dark shadow over the lives of Amelia and Samuel. She can't get over the loss of her husband and the boy is plagued by nightmares night after night. Despair, frustration and enormous fatigue are written all over the single mother's face from the very first scene.

Unlike other films of this subject, then, evil does not break into an (apparent) idyll. Rather, it takes advantage of the existing suffering and fears of the two main characters and intensifies them many times over. This has the advantage that as a viewer, you don't constantly feel like you've seen this movie before. The Babadook feels fresh and unspent despite many references to traditional horror fare and even the German expressionism of an F.W. Murnau. The downside is that the heaviness and dreariness that prevails from the start makes it difficult for the viewer to connect with the characters and the story.

However, after the first 40 minutes, the horror takes on more and more concrete form. And it works really well. With top-notch sound design and very traditional creepy effects, Jennifer Kent consistently delivers extremely effective goosebump moments. These are superbly supported by the very atmospheric imagery. While the film may not appeal to a wide audience, it is a good to very good scary movie almost to the end, where you'd be happy to agree with the praises of Stephen King and co. But the finale finally, about which of course nothing shall be revealed at this point, clouds the overall impression, which in itself is very positive, a little.

The resolution seems a little bland after the enormous build-up of suspense and lacks the originality that the rest of the film has radiated so confidently. But even if the last few minutes have dramatic flaws, The Babadook is undoubtedly one of the better scary movies of recent years. It's sad that adult horror like this, which relies on over-the-top carnage, quick cuts, and any pandering to a target teenage audience, has such a hard time winning over a wider audience. Because despite its flaws, The Babadook absolutely deserved that! Worth Seeing

Cinema trailer for the movie "The Babadook (Australien/Kanada 2014)"
Loading the player ...