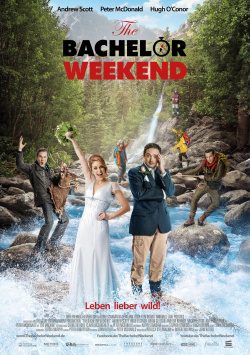 The wedding of Ruth (Amy Huberman) and Fionnan (Hugh O`Conor) approaches in leaps and bounds. And while the sensitive groom is fully absorbed in planning the celebration, his enthusiasm is driving not only the wedding planner but also his bride-to-be to the brink of insanity. That's why Ruth decides to hire Fionnan's best friend Davin (Andrew Scott) to plan a spectacular bachelor party. Not an easy task, as Fionnan really dislikes stag parties. The fact that Davin also has to invite Ruth's brother, who is called The Machine (Peter McDonald) for a reason, to the party doesn't make the task any easier. But then he has a brilliant idea: he invites the closest circle of friends to a relaxing weekend in the Irish wilderness and forgets to invite The Machine. So nothing stands in the way of a nice weekend among friends. But suddenly Fionnans brother-in-law stands before the small troop and it begins a chaos trip, in which The Machine will still turn out to be the least problem for the men.

The beginning of John Butlers feature film debut The Bachelor Weekend lets expect another Hangover variant. The initial premise promises to be pure extraneous comedy, and The Machine's character seems to be just another Stifler clone, the likes of which have been endured dozens of times since the success of the American Pie films. But even though the comedy has some zaniness and deeper gags to offer, the bottom line is that initial appearances are deceiving. Certainly, The Stag Party in the Irish Wilderness is no fine-boned head-scratcher. The viewer is not offered any big surprises or subtle humour. But the turbulent comedy offers whimsical entertainment of the charming kind.

This is on the one hand of course due to the decent script, which offers some very good laughs, but also a few nice interpersonal moments and relies just not only on the very simple zoten. On the other hand, the film also works because of the good cast. Hugh O`Conor is perfectly cast as the groom with a slightly too pronounced feminine side and Andrew Scott (Sherlock) as his best man with a dark secret provides the perfect counterbalance. Peter McDonald wears a bit thick at the beginning, but then gives his character a few other sides as the film progresses, making The Machine a more interesting character than it first appears.

Some very nice landscape shots and a few really funny ideas also make this story about not exactly uncomplicated male friendships amusing cinema entertainment. A camping trip of the more chaotic kind, which has the heart in the right place and can score with its sympathetic characters. Even if some cliché is a little overused here, there is in the end for friends of light comedies a very clear: worth seeing!

Cinema trailer for the movie "The Bachelor Weekend (Irland 2013)"
Loading the player ...