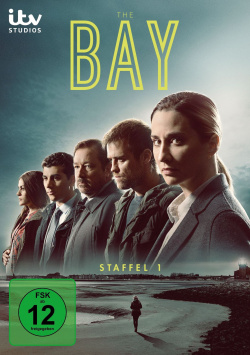 Movie: When policewoman Lisa Armstrong (Morven Christie) is assigned to investigate the disappearance of twins Holly and Dylan in the British coastal town of Morecombe, she has no idea that this case will become very personal for her. For in the stiff father of the two teenagers she recognizes the man with whom she had a one-night stand the night before. While she can't reveal the stepfather's alibi, the police are desperate to find the siblings - until a body is found on the pier.

A six-part crime drama, The Bay may at first glance seem reminiscent of the acclaimed series Broadchurch (and its various remakes). But while the similarities are undeniable, The Bay ends up going very much its own way and doesn't feel like a flat knock-off. The dramaturgy can also benefit from the fact that the police work actually has a rather subordinate role. Instead, the focus is on how the crime affects not only the twins' family, but also that of police officer Lisa. As a result, the series ends up being more gripping drama than rousing thriller - and it works really well.

In the lead role is Morven Christie, who series fans will know from Grantchester. She's utterly convincing as an outwardly tough policewoman struggling with family problems and a major mistake that causes her to sabotage the investigation. Sure, especially when it comes to her children, some aspects of the story seem contrived. But Christie plays credibly over such script weaknesses. She thus creates an extremely interesting character who is a pleasure to watch fight crime, as well as her own flaws.

Another major character is the location, the seaside town of Morecombe. The team has received great support from the town, always with the proviso that the place is not portrayed in a negative light. The makers have succeeded very well in this, even if they repeatedly reveal the darker side behind the picturesque façade. The Bay may not reinvent the wheel. But from already known ingredients, a consistently exciting and rousing soup is cooked here, which only has a few places dramaturgically a slightly pale aftertaste. All in all, there is clearly a: Absolutely worth seeing!

Picture + Sound: The filming locations on the west coast of England are captured in very atmospheric images, which thanks to the coherent color scheme and good image sharpness on the DVD can develop their power very well. The detail presentation is absolutely convincing, at least in the outdoor shots, only in the darker indoor shots there are slight point deductions. The audio is in a decent Dolby Digital 2.0 mix, with ambient noise in particular making for good use of the surround channels. Good!

Extras: As a bonus there is a short, but worth seeing Making of (about 9:14 min.), where actors and creators of the series get to speak.

Conclusion: The Bay is superficially a very conventional crime series. But by the fact that here not only the work of the police is portrayed, but also shown what a terrible crime triggers in the family concerned, the whole thing is much deeper and more involving than in other series of this genre. The DVD presents the 6 episodes of the first season in good picture and sound quality. As an extra there is a short look behind the scenes. All in all, clearly a: Absolutely recommendable.