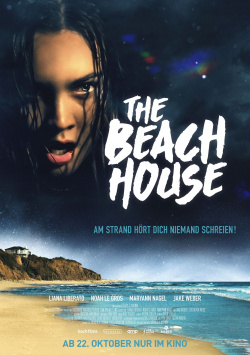 The Beach House - At the beach no one hears you scream!

Actually, Emily (Liana Liberato) and her boyfriend Randall (Noah Le Gros) wanted to spend a vacation in romantic togetherness. Randall's father's picturesque beach house is actually perfect for this. But the young couple soon finds out that they're not the only ones who have chosen the house for a getaway together. The Turners (Jake Weber, Maryann Nagel), friends of Randall's father, are also guests here. After all, the two couples get along very well and everything suggests that the vacation will be very nice, despite the initial disappointment. But appearances are deceptive, as the Turners start acting increasingly strange. When mysterious cocoons appear on the beach, the planned dream vacation slowly but surely turns into a solid nightmare.

"The Beach House" begins like a fairly conventional horror film. But appearances are deceiving. Director and screenwriter Jeffrey A. Brown's feature debut was inspired by personal experiences, which Brown then combined with his fondness for '50s horror films. The result is an atmospheric nightmare that takes on almost psychedelic proportions. The film plays much more with atmospheric images than with real shock moments. You have to be able to get involved with that as well as with the rather slow narrative tempo. If you can do that, you will get some effective indie horror.

Finding the right location for the story was no challenge for Brown, as he has worked as a location manager for numerous major Hollywood productions in the past. With the vacation home of the father of producer Andrew Corkin in Cape Cod, the right house was found quickly. The film was shot out of season, which gives the picturesque area an almost spooky atmosphere. In this, the story can unfold well, even if the script reveals here and there some weak points, such as overly sprawling dialogue.

"The Beach House" is visually and dramaturgically not necessarily light fare. Some genre fans will find the lengthy dialogue or the whimsical delusions of the protagonists hard to take. But if you like it a little quieter and more inappropriate, but very atmospheric, a trip to this horror beach house can be thoroughly recommended. Worth seeing!

Cinema trailer for the movie "The Beach House - At the beach no one hears you scream! (USA 2019)"
Loading the player ...