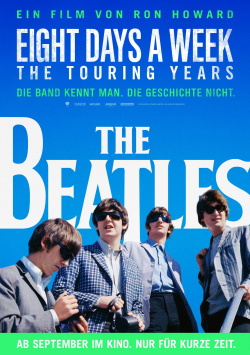 The Beatles: Eight Days A Week - The Touring Years

They were one of the greatest phenomena in pop history. Their songs are immortal and the hysteria they caused is still unmatched today. Director Ron Howard has used fascinating archive footage and numerous interviews to stage a superb documentary that is not only a feast for all fans of the mushroom heads. With The Beatles: Eight Days A Week - The Touring Years he also offers a whole new generation the opportunity to get to know and love the Beatles. In doing so, the film doesn't offer a glimpse into the band's complete history, but instead focuses on the years in which the Fab Four drove fans crazy with their live concerts.

Their beginnings, in which Hamburg played a major role, are ticked off just as quickly as the events that ultimately led to the band's demise. For many fans, it is the late phase of the band that is the more interesting period from a creative point of view. Those who want to learn more about the time in which the last albums were made, but in which the Beatles hardly gave any concerts, might be a little disappointed by the film. But if you want to see a documentary from the height of Beatlemania, this is the film for you.

Besides some live clips, it's especially the archival footage that makes the film so worth watching. Seeing the young Beatles clowning around during interviews and not taking themselves too seriously is thoroughly entertaining. At the same time, as the documentary progresses, it also becomes clear what a toll success has taken, how hard life has been in the constant spotlight, constantly on the go, with no chance to retreat from the hustle and bustle.

In addition to the very well edited archival footage, there are also many interviews with other artists such as Elvis Costello, Whoopie Goldberg, comedian Eddie Izzard, and director Richard Curtis, who tell what significance the Beatles had on their lives. And, of course, Paul McCartney and Ringo Starr also talk in newly recorded interviews about how they experienced their time on tour, how the cohesion within the band changed as a result of their success, and how at one point they tried to break out of it all by completely reinventing themselves musically - which, in turn, was not particularly well received by some fans.

The Beatles: Eight Days A Week - The Touring Years is an excellent music documentary in terms of both craft and content, with just under 30 minutes of clips from a concert at New York's Shea Stadium at the end. These sequences from the legendary concert were digitally restored for the release and are shown in new quality for the first time as part of the documentary. For Beatles fans or all who want to become one, there is no question: Absolutely worth seeing!

Cinema trailer for the movie "The Beatles: Eight Days A Week - The Touring Years (Großbritannien/USA 2016)"
Loading the player ...