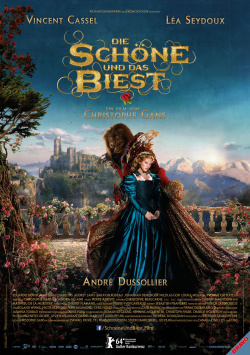 There are always classic materials that are adapted so often that one has to wonder if there really needs to be another new version. One such material is the French folk tale Beauty and the Beast. In addition to the multi-award-winning Disney animated film, the story has been staged for cinema, television or the stage as a classic fairy tale, a modernized version or a musical. And while there's little chance of gaining anything new from the story, Christophe Gans (Pact of the Wolves) attempts to do just that with his very own, visually stunning adaptation.

Following the classic motifs, he tells of the wealthy merchant (Andr&eacute; Dussollier) who loses all his wealth when his small merchant fleet sinks in a storm. Now he and his six children must leave their luxurious home and live a meager life on the land. While two of his daughters in particular suffer as a result, the youngest, the beautiful Belle (L&eacute;a Seydoux) really blossoms here. One of the journeys the merchant takes to reclaim his wealth leads him, by chance, to the hidden castle of a fearsome beast (Vincent Cassel). Because the merchant has stolen a rose he intended to bring to Belle, the beast sentences him to death. Feeling responsible, Belle wants to take her father's place. But death does not await her in the castle, for the beast has quite different plans for the beauty, who is to keep him company at dinner every night from now on. While Belle slowly loses her fear of the giant beast, she also finds out more and more about his secret. And soon she has to realize that the real danger does not come from the terrifying creature.

Christophe Gans has conjured up a visually stunning fantasy fairy tale from the classic template, which stylistically treads similar paths to the recent Snow White and the Huntsman. The effects aren't always perfect, but they offer enough fodder for the eye to comfort over some dramaturgical length. But it's not just visually that the French-German co-production is trying for a breath of fresh air. Gans has also tried to put his own stamp on the all too familiar story here and there. However, he only succeeded to a limited extent. For apart from a few brief moments, the production as a whole comes across as rather lacking in surprises and, despite all the modern CGI effects, rather old-fashioned.

Now that may sound as if this umpteenth rehash of Beauty and the Beast is just boring and completely unnecessary. But while the need for another adaptation is debatable, the film can't be denied good entertainment value. The pacing is just right, as is the mix of fairy-tale drama, imaginative suspense and indulgent romance. And the actors, especially L&eacute;a Seydoux as Belle, deliver consistently good to very good performances. However, the whole thing is far less child-friendly than, say, the Disney version. Especially towards the end, there are some sequences that could be quite scary for younger children. And even though the film has been given a 6+ release, this version of the fairy tale is still aimed more at an audience no younger than 9.

If you're expecting a typical Christophe Gans film, Beauty and the Beast will certainly disappoint. However, if you want to see a successful mix of classic fairy tale material and modern fantasy adventure, and if you can be enchanted more by the great pictures than by the story, you can expect a truly fairy tale cinema experience here. And for this there is then - with a few small deductions in the B grade - a very clear: Recommendable!

Cinema trailer for the movie "Beauty and the Beast (Frankreich 2013)"
Loading the player ...