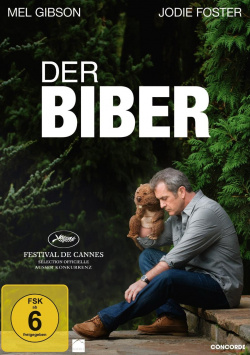 Film: In recent years Mel Gibson has attracted more attention with unflattering headlines than with good films. Now, with The Beaver, the latest directorial effort from Jodie Foster, Gibson is trying to redeem his reputation as an actor, and he's chosen a role, of all things, that will always make viewers think of the Gibson from the unflattering headlines. But what could have hurt the film at first glance turns out to be a blessing in disguise, giving The Beaver a credibility and seriousness that the film desperately needs, if only because of its premise.

Once upon a time, Walter Black (Gibson) was a successful toy maker and loving family man. But for some time now, Walter has been suffering from terrible depression. His marriage to Meredith (Jodie Foster) is in shambles, his older son Porter (Anton Yelchin) is totally estranged from him, and he can't live up to the admiration his youngest offspring Henry (Riley Thomas Stewart) has for him. Just as he's about to finally give up and put an end to his existence, he finds an old beaver hand puppet that brings him back to life. Talking through the beaver, Walter manages to get a handle on his depression, soar to new heights professionally, and even get closer to his wife again. But even if on the surface the sun soon shines again in Walter's life, it soon becomes clear that he will not be able to hide behind the beaver forever. But even the first attempt threatens to end in disaster.

The Beaver is a somewhat odd film, though this is not to be taken as a negative. Like the titular hand puppet, the mix of whimsical humor and dark drama has an engaging life of its own, which gives the film a very unique charm. Easily, the story about a man who communicates with his fellow man via a fluffy hand puppet could have become silly and flat. However, Foster has struck just the right tone so that exactly that doesn't happen. The story itself is very dark, sad and actually depressing. But purposefully placed laughs and some simply wonderful moments prevent the viewer from being emotionally sucked in.

To really enjoy this puppet show, however, you have to get involved with the unusual mixture. Those expecting a shallow comedy will be just as disappointed as lovers of rather heavy tragedy. But those who can make friends with the production and the somewhat unusual premise will be rewarded with great acting, lots of emotion and original wit.

While Foster herself remains somewhat pale, though this is less due to her performance and more to the character she plays, Gibson shines in a role that seems tailor-made for him. He lets his demons run wild, commenting on the headlines that have taken a toll on his reputation, but also with a self-deprecating wink. The nervous breakdown of Walter is especially through the controversial figure Mel Gibson believable and of a certain intensity, which contributes much to the success of the film.

Not to be left unmentioned should the two supporting actors Anton Yelchin (Star Trek) and Jennifer Lawrence, who is known for Winter`s Bone and 2012 at the latest by the main role in the best-selling film adaptation The Tribute of Panem create the big breakthrough. The subplot involving Walter`s son and his classmate detracts a bit from the actual story, but is quite moving and entertaining thanks to the two excellent young actors.

Bottom line, The Beaver can be described as a good entertainment film beyond the mainstream. While not every note is right, the overall picture just rings coherent and convincing. Great acting and a good handling of a rather odd story make this tragicomedy just the kind of film that could bring Mel Gibson a big step closer to his status as a serious actor again. Worth seeing!

Picture + Sound: The technical realization is on a good level, with both the good, clean and pleasantly sharp image, as well as the atmospherically mixed sound overall decent and appropriate to the film rather unspectacular. Good!

Extras: The bonus material is clear and not very spectacular. The audio commentary by Jodie Foster is quite factual and informative, but unfortunately not subtitled. The making of is rather short at 11 minutes and is also highly promotional in nature. The 4 minutes of deleted scenes also offer no real enrichment to the film. The trailer as well as other program tips of the provider close the bonus offer then already again.

Conclusion: The Beaver is a somewhat strange film, but if you can get involved in it, very good entertainment at a high level. At the same time, Mel Gibson proves that despite all the scandals, he's still a damn good actor. If you like tragicomic family dramas of a different kind, you should definitely give this one a look. Worth seeing!