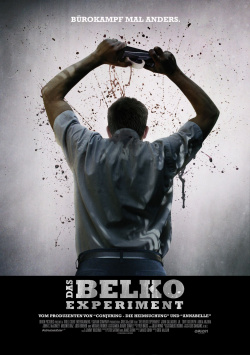 The American office workers of Belko Industries in Bogot&aacute, Colombian city; are astonished when, on an otherwise ordinary morning, they are met by a new security detail that sends all the local employees back home. A short time later, when the isolated building is hermetically sealed off, they also believe it's a bad joke. But when they are then ordered to kill three colleagues in the next 30 minutes, and when there are actual deaths after this deadline, they realize that they are trapped in a horrific nightmare. And if the voice giving them orders via loudspeaker has its way, only one of them will probably be able to survive this day. Now it's up to them to fight together for survival and not get involved in the mind games - which is becoming more impossible by the minute.

Australian filmmaker Greg McLean has been known since his successful debut Wolf Creek for liking to take things up a notch. This is undoubtedly true of his latest work, The Belko Experiment. However, the film isn't just mindless carnage. The script by James Gunn, the writer and director of the Guardians of the Galaxy films, alone ensures that. Gunn has infused this office version of Battle Royale with a wickedly cynical tone, giving it a delightfully satirical edge. As a result, McLean has created a thriller that is both suspenseful and amusing, both extremely gory and cryptic.

Admittedly, there are some lengths, especially in the middle section. The death of single office workers is a bit tiring in the long run. Moreover, the story doesn't seem very surprising at this point. Even a few amusing dialogues can't help to overcome the boredom that sets in. But luckily this low is only of a short duration. Because to the showdown it goes again properly to the thing - and there are also still a few surprises of which probably most will not see at least one coming.

The cast, which includes James Gunn's regular Michael Rooker and Gunn's brother Sean (Kirk from Gilmore Girls), is decent, but doesn't really get a chance to reveal a wide facet of acting ability. However, that's not the point here either. The Belko Experiment is a breathless fight for survival, with little time for long dialogue or great character development, especially in the second half. It's very quickly clear which characters are sympathetic and which characters will turn into bloodthirsty killers.

However, even though there are dramaturgical flaws and very predictable character sketches, overall The Belko Experiment is a great treat for genre fans, with an ending that definitely makes you want to see more. Worth seeing

Cinema trailer for the movie "The Belko Experiment (USA 2016)"
Loading the player ...