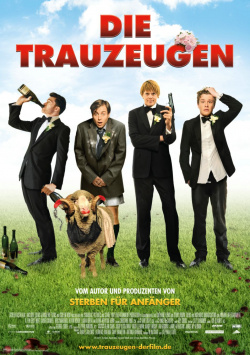 It's the big love: although Englishman David (Xavier Samuel) and his Australian holiday acquaintance Mia (Laura Brent) have only known each other for a few weeks. But nevertheless David is sure that in her he has found the woman he wants to spend the rest of his life with. And so he proposes to her on a picturesque beach, which Mia accepts without hesitation. Davis' best friends Tom (Kris Marshall), Graham (Kevin Bishop) and Luke (Tim Draxl) are initially shocked when they learn of their buddy's wedding plans. Nevertheless, it doesn't take long for them to be persuaded to travel to Australia with David as best men. But no sooner has the clique arrived Down Under that David's friends and Mia's heavily wealthy family don't quite want to get along. And so it's only a matter of time before the big dream wedding threatens to descend into complete chaos...

The Best Man is not a particularly clever comedy. The film by Stephan Elliott (Priscilla - Queen of the Desert, Easy Virtue - An Immoral Wife) is not too shy for any cliché or even the crudest of zotes. But even though the whole thing might sound like a rather flat rip-off of the Hangover movies, the turbulent goings-on of the English groomsmen in Australia can be relatively enjoyable. Although some of the gags are really flat and some actually very funny ideas are overused too much. Nevertheless, the film leaves a quite positive impression - provided, of course, that you like it a bit coarser and more overdone sometimes.

Why the slapstick still works despite its weak points, is largely due to the well-chosen cast. While groom Xavier Samuel (Anonymous, Eclipse) remains somewhat pale, his groomsmen, portrayed by Kris Marshall (Love Actually), Kevin Bishop (L`Auberge Espagnole), and Tim Draxl, make for a decent charm offensive despite their chaotic demeanor. And comedian Rebel Wilson (Bride Alarm) as Mia`s supposedly lesbian sister Daphne, Jonathan Biggins as head of the family Jim, who seems prouder of his award-winning sheep than he is of his daughters, and last but not least Grease icon Olivia Newton-John as a frustrated wife, also console over many a weakness.

However, a good cast alone does not, of course, make for a successful film. It is true that the comedy clearly benefits from its playful ensemble. But also some very funny ideas, such as the very special interpretation of some well-known hits by the probably worst wedding band in the world, and in a very sympathetic way unrestrained silly scenes and not least the picturesque backdrop of the Blue Mountains in Australia contribute to the fact that The Witnesses still bring this chaos wedding to a satisfactory conclusion.

From director Stephan Elliott and screenwriter Dean Craig, who already wrote the script for the wonderfully black comedy Dying for Beginners, a little more cleverness and bite could have been expected. But who wants to be entertained in the simplest way and accept the one or other zote for it, can confidently go with the witnesses on an entertaining trip to Australia. Worth seeing

Cinema trailer for the movie "The Best Men (Australien/Großbritannien 2012)"
Loading the player ...