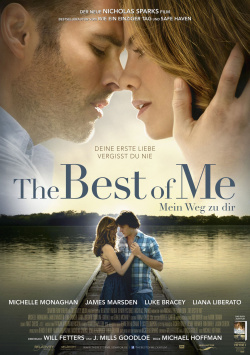 The Best of Me - My Way to You

When loner Dawson (Luke Bracey) falls in love with Amanda (Liana Liberato), who comes from a good family, their relationship is ill-fated from the start. Amanda's father is a thorn in Dawson's side, not least because his family doesn't have a particularly good reputation in town. Nevertheless, the young couple spend some wonderful moments together before they are separated by a tragic event. Twenty years later, Dawson (James Marsden) returns home to pay his respects to the recently deceased Tuck (Gerald Mcraney). Here he also reunites with the now-married Amanda (Michelle Monaghan), who is initially extremely dismissive of him. But the tender bonds of old soon blossom again and both must face the painful chapter of their past once more.

The Best of Me - My Way to You is already the ninth film adaptation of a novel by Nicholas Sparks. True, best-selling adaptations have never been award-worthy quality cinema. But films like Message in a Bottle or Like a Single Day have shown that Nicholas Sparks' stories are very well suited for uninhibitedly cheesy emotional cinema with a high consumption of tissues. Although it's not uncommon for very similar set pieces to be used, and often the tearjerking isn't exactly subtle, the books and their film adaptations usually just work really well. Of course, among the Sparks films to date, there have been some pipe-drops, but it's not until the ninth attempt that things get really bad.

What the actually talented director Michael Hoffman (Days Like This, A Russian Summer) has screwed up here is hard to stomach, even with extreme good will. There's no denying that the film has some very beautiful imagery to offer. Also the music, which comes from the band Lady Antebellum and singer Colbie Caillat, among others, can fully convince in places. And finally, the chemistry between the two main actors James Marsden and Michelle Monaghan is quite coherent. But all this helps little against a script that is bursting with clichés and unintentionally funny dialogues and against a production that is simply unsuccessful in many aspects.

The very fact that the makers have made no discernible effort to cast actors for the younger versions of Dawson and Amanda who even remotely resemble their older counterparts is a disturbing testament to the lovelessness and superficiality by which the romance is dominated. The completely over-the-top portrayal of Dawson's brutish hillbilly father also completely defeats its purpose and not infrequently brushes the line of embarrassment. This is especially noticeable in the dramatic finale, where any potential for great emotion is completely wasted.

The Best of Me - My Way to You, with all its flaws, should be hard to stomach even for diehard romance lovers. This Nicholas Sparks film adaptation is a major disappointment in almost every aspect, and would be better off on TV after a Rosamunde Pilcher tearjerker than on the big screen. And that's why, even with the best will in the world, there's no way around this conclusion: unfortunately not worth seeing at all!