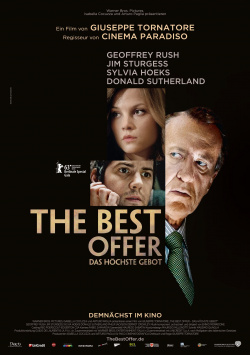 The Best Offer - The Highest Bid

Giuseppe Tornatore, who has masterfully told tales of hidden passions, great secrets and unrequited love in films such as Cinema Paradiso, The Unknown and The Magic of Manela, proves to be a great storyteller once again with his latest work The Best Offer - Das höchste Gebot. The drama centres on art expert and auctioneer Virgil Oldman (Geoffrey Rush), who can only develop a genuine passion for his works of art. In contrast, the loner usually feels only dislike and disinterest towards his fellow human beings. Virgil does not know true friendship. Only with his partner Billy (Donald Sutherland), who has been buying paintings for Virgil at auctions for years, does the art dealer have a kind of friendly bond. And Virgil also has something like respect and affection for the young restorer Robert (Jim Sturgess). But other than that, all Virgil cares about is his art. That changes with a phone call he receives on his 63rd birthday: young Claire (Sylvia Hoeks) desperately asks him to liquidate the estate of her recently deceased parents. Although she stands him up at the first meeting, and even at a follow-up appointment only the estate manager shows up, Virgil, against all his habits, accepts the assignment. Not only is Virgil so inexplicably fascinated by the parts of a mysterious machine he finds in the house, but also by the owner, who is invisible to him, that he throws all his rules and reservations to the wind. And suddenly he gets to know completely new sides of himself and his life.

The Best Offer - Das höchste Gebot is a very nobly staged mixture of drama, love story and mystery. Giuseppe Tornatore takes a long time to build up his story. Boredom is perfectly avoided by the indulgent imagery, which harmonizes perfectly with the artwork that Virgil repeatedly gazes at in awe, but also by the engaging acting of Geoffrey Rush. Instead, the paced back builds a hugely engaging atmosphere that not only keeps the viewer riveted to the story, but also makes them empathise with why the estate of Claire's parents, but more particularly the young woman who seems to hide so vehemently from him, hold such a fascination for the art dealer.

Anyway, the film thrives on its main character. The great interplay of Geoffrey Rush's wonderful acting and the sometimes very amusing, then again cleverly intelligent screenplay makes for such a tasty melange that any slight length is instantly eliminated. The story itself is kept rather simple despite the many twists and turns, especially since Tornatore gives away the film's biggest twist virtually in passing long before it occurs. Those who follow the events attentively won't really be surprised at the end then. Nevertheless, an unexciting tension remains until the last shot, which is owed less to the story itself than to the haunting atmosphere of Tornatore's production.

The Best Offer - Das höchste Gebot doesn't really reach the class of many other films by the award-winning filmmaker. Nevertheless, this unusual romantic drama again offers entertainment on a very high level. Wonderful pictures, great actors, a beautiful and rousingly constructed story, the atmospheric soundtrack by old master Ennio Morricone as well as a masterful, yet somehow unobtrusive set make The Best Offer - Das höchste Gebot a must-see for Tornatore fans and for everyone who likes sophisticated arthouse dramas. Absolutely worth seeing

Cinema trailer for the movie "The Best Offer - The Highest Bid (Italien 2012)"
Loading the player ...