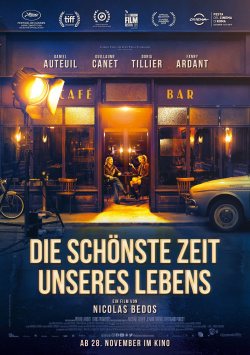 The Best Time of Our Lives

Once Victor (Daniel Auteuil) was a creative genius, a man to look up to with admiration. But now, especially to his wife Marianne (Fanny Ardant) and son Maxime (Micha&euml;l Cohen), he's nothing but a pain in the ass who finds fault with everything and everyone. While Marianne has long since taken refuge in an affair, Maxime looks for another way to free his father from his old-age stubbornness. He invites Victor to travel back to a time of his choosing with the help of his friend Antoine's (Guillaume Canet) company Time Travellers. This is then to be recreated in a film studio in an absolutely authentic way. Victor agrees and decides on the evening in 1974 when he fell in love with Marianne. In sets and under spotlights, he is now allowed to reminisce once more, helped by actress Margot (Doria Tillier), who plays the young Marianne for him. And as the lines between then and now become more and more blurred for Victor, he actually seems to find his old fire again.

Many surely wonder what it would be like to be allowed to relive a certain moment of their past. To once again feel a special feeling that seems long forgotten, to once again visit a place that no longer exists. Wouldn't that be nice? Or would it be better to let bygones be bygones, so as not to destroy one's fond memories? In a wonderfully playful way, The Best Time of Our Lives explores this question. The mixture of quiet drama and light comedy is a bit infused with the spirit of The Truman Show, and in the process shows us that sometimes you have to look back to appreciate your present life and the people in it.

Admittedly, at times the film feels a bit cluttered. The plotline around Antoine, who gives his all to make other people happy while seeming incapable of feeling real emotion or anything like romance himself, takes up too much space at times, catapulting the more interesting part of the story into the background a bit. Apart from that, Nicolas Bedos succeeded in making a really nice movie, which is not only really funny, but also really touches your heart. Yes, like the world Time Travellers creates for its clients, the film sometimes feels contrived and too good to be true. But in its very own way, The Best Time of Our Lives manages perfectly to make you as a viewer let yourself go and simply forget about reality for almost two hours. And for that you also accept some inconsistencies very gladly.

In addition, the film also makes you think, because you inevitably ask yourself while watching, which moment from your own life you would like to have reconstructed again, which people you would like to see again or which mistake you would make good. And maybe at the end there is even the personal realization that it is never too late to refresh old acquaintances, to say sorry or to find something that makes life exciting and simply worth living even in the last few metres. If you like light French comedies and charming feel-good cinema, this is the movie for you. Absolutely worth seeing!

Cinema trailer for the movie "The Best Time of Our Lives (Frankreich 2019)"
Loading the player ...