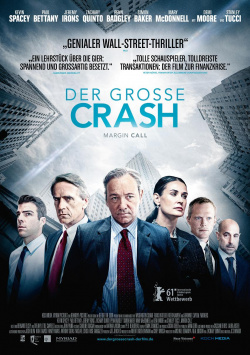 2008 will go down in history as the year in which the banking crisis shook the entire financial world to its foundations - with consequences that are still unforeseeable today. Filmmakers have often attempted to deal with the financial crisis and its consequences in cinematic form in ambitious works, including Oliver Stone's Wall Street or, most recently, the superbly cast Company Men. Now, with The Great Crash - Margin Call, the best contribution to date on the subject is coming to our cinemas. Director J.C. Chandor manages in his low-budget drama shot in a few days to bring the whole problem almost chamber play-like to the point.

It is not a rosy day for the employees of a large investment bank on New York Wall Street. Many employees are informed that morning that they no longer have a job. Even senior risk analyst Eric Dale (Stanley Tucci), who has served the bank well for many years, is shown the door from one moment to the next. At the last second, he is able to slip his protégé Peter (Zachary Quinton) the results of an important analysis on the current state of the company. And after Peter does his own calculations, it's clear that all is not well with the company. Immediately he and his colleague Seth (Penn Badgley) inform their superior Will (Paul Bettany), who realizes at the sight of the calculations: this analysis must be passed on immediately to the very top. Together with their boss Sam (Kevin Spacey), Peter, Seth and Sam face the entire board of directors in the nighttime hours, who decide on a highly speculative bailout that forces everyone involved to overstep their moral boundaries.

The Big Crash - Margin Call is a magnificently acted chamber drama that manages to convey a complex subject matter in a compelling and terrifyingly believable way. What's fascinating about it is that nothing more actually happens than animated discussions about what is in itself a rather dry, factual topic. But precisely because the whole thing is presented in a rather sober manner and without any emotionality infused with pathos, the explosive nature of the story is able to transfer itself to the viewer and captivate him for over 100 minutes. The script, written by Chandor himself, shines with intelligent dialogues that make the events accessible and understandable even for laymen. These are performed by an ensemble of actors that any director would probably lick their fingers for.

From convincing up-and-coming actors like Zachary Quinto (Star Trek), who also served as co-producer, or Penn Badgley (Gossip Girl) to more experienced performers like mentalist Simon Baker and Paul Bettany to full-on professionals Kevin Spacey, Stanley Tucci and Jeremy Irons, they all deliver performances that are gripping and just plain great. Even the oft-maligned Demi Moore fits easily into the strong male cast. In the super-cool visuals of largely empty, sparsely lit offices, this ensemble unleashes an acting power that is hard to resist as an audience member.

The Big Crash - Margin Call is a first-rate economic thriller, a frightening look behind the curtain of a crisis that few have caused, but which affects so many. A powerful piece of cinema that proves that exciting, intelligent entertainment can be achieved through dialogue alone and the presence of strong actors to match. Absolutely recommendable