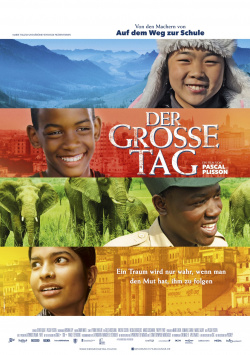 What do children dream of? What do they want to be when they grow up? This is a question that children all over the world grapple with. But even though many children know early on what they want for their future, many lack the courage or simply the opportunities to actually make their dreams come true. Pascal Plisson, who has already accompanied several children from remote corners of the world on their way to school, presents four children in his new film who defy all odds to make their wishes come true. Nidhi from India, for example, is determined to become an engineer. But to do so, she has to go to a very special school that only accepts children who pass a difficult aptitude test. Albert from Cuba, on the other hand, wants to become a successful boxer and thus find his way out of poverty. But he has to learn that talent alone is not enough to prevail against the competition. Deegii from Mongolia is just 11 years old and already spends all her free time training her body for her big dream: she wants to be one of the celebrated contortionists one day and show her talent all over the world. Tom from Uganda has a completely different idea of his future. He wants to become a ranger in a national park. But to do so, he must first pass the difficult and enormously comprehensive exam.

All these children and young people must push past poverty, flawed education systems, and other difficulties to be ready for when The Big Day comes to decide their futures. The stories told here are very beautiful in themselves and also serve a certain role model function. Especially children in this country can realize how many chances they have that they don't have to fight for every day like the four protagonists here. And perhaps they also realize that they simply leave many of these opportunities unused or do not appreciate them because they have become something they take for granted. On that basis, the film, like On the Way to School, is educational and recommendable.

On the other hand, the work suffers from exactly the same problem as its predecessor. For once again Plisson chooses an awkward middle ground between feature and documentary. The protagonists are real, but their stories are only retold. As the viewer quickly notices this, the production seems very contrived, a little cramped here and there and also a little manipulative in its imposed dramaturgy. Again, the filmmaker seems to want to artificially build up tension with conflicts, which these stories actually don't need. This becomes especially clear at the end, when the children and teenagers are allowed to break out of their game and speak naturally into the camera.

And so it is also true of The Great Day that this may have become an important film and a good one for children. But the feeling remains in the end that the film could have been much more powerful and thus effective with less staging and more authenticity. Nevertheless, the bottom line is still a decent: Worth seeing!

Cinema trailer for the movie "The Big Day (Frankreich 2015)"
Loading the player ...