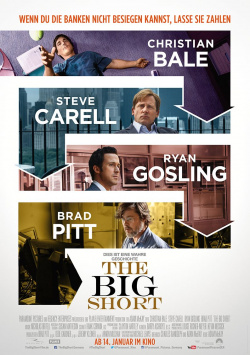 New York in 2005: Trading on Wall Street is booming, investors are happy. Day after day, millions of dollars worth of trades are being made here, most notably in real estate products that promise excellent returns with supposedly minimal risk. But for hedge fund manager Michael Burry (Christian Bale) it's clear: the whole thing is a bubble about to burst. And when it does, millions of people will lose their jobs and their homes. But blinded by the quick buck, no one wants to listen to Burry. Burry intends to exploit this ignorance. Together with some risk-taking speculators around trader Mark Baum (Steve Carell) and Deutsche Bank broker Jared Vennett (Ryan Gosling), he wants to make big money by shorting large investment beacons when the financial markets collapse. At first it looks like Burry was wrong, but then disaster strikes - and with it a battle beyond all moral boundaries.

Comedy specialist Adam McKay (Anchorman) ventures with The Big Short on an almost impossible undertaking: he wants to convey very complex content not only understandable for laymen, but also entertaining, without the scope of what is happening is thereby weakened. The viewer should be able to understand how unscrupulously people's lives were speculated with here, but should also be able to laugh at the same time and spend two entertaining hours. On the one hand, the film should excite and stimulate discussion, but on the other hand it should simply be fun. A difficult undertaking, which McKay has mastered with bravura.

It would now certainly be presumptuous of me to claim that I, as a complete layman in matters of finance, stock market transactions and real estate speculation would have understood everything. Although McKay finds amusing ways to explain some of the important technical terms - such as actress Margot Robbie in a bubble bath or singer Selena Gomez playing poker - many of the processes are simply too complicated to understand in any detail. Still, the production succeeds very well in opening up the subject matter to a wide audience and really making everyone realize what a monstrosity took place - and that those responsible seem to have learned nothing from their mistakes.

The Big Short is an excellent satire that not only lives up to its intention of educating viewers about an important subject that may well have been unknown in full to most - even though it may have affected them in some way. It also manages to entertain its audience at a high level for over two hours. Carried by an exquisite ensemble of actors, the script is able to unfold its full power again and again. You are swept along by the events, even if you have difficulties understanding all the connections. And if you have to laugh heartily one moment, it gets stuck in your throat the next.

Adam McKay proves that you don't have to serve this kind of material in a dry and beer-serious way and that you can also convey the right message with a loose satirical tone. His film is intelligent, clever and extremely entertaining. And just to experience Christian Bale's oddball acting or Ryan Gosling's delightful arrogance makes buying the movie ticket worthwhile. For this there is a very clear: Absolutely worth seeing!