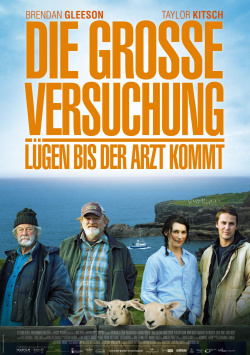 The Great Temptation - Lies Till the Doctor Comes

The residents of the small harbour village of Tickle Head are desperate. With its fishing grounds depleted, the once-idyllic village on a small island off Newfoundland is plunged into a deep crisis. Most of the residents live on the dole, but it allows for only a very modest life. But then there is a glimmer of light on the horizon. A large company is considering building a factory on the island, which would finally bring back work for the villagers. However, there's one small problem: the company's board of directors demands that there be a doctor on the island. But no doctor wants to settle in this wasteland. And the residents have little time to convince ANYONE with a doctor's degree that Tickle Head is a little paradise.

But then fate once again favors the residents of the village. After young plastic surgeon Dr. Paul Lewis (Taylor Kitsch) is caught at the airport with drugs in his luggage by the former mayor of Tickle Head, of all people, he is ordered to practice on the island for a few weeks. Village head Murray French (Brendan Gleeson) now hatches a plan to seduce the young doctor into permanent employment and thus bring the factory to the village. What seems to work well at the beginning, but in no time the entire village plunges into a very amusing chaos, whereby the real goal but again threatens to slip into the far distance.

The great temptation - lies until the doctor comes is an almost identical remake of the French Canadian hit comedy The great seduction from 2003. Writer Ken Scott has changed his script with the help of Michael Dowse only marginally, so that connoisseurs of the original get to see here really little new. In fact, such a 1:1 copy should be dismissed as utterly unimaginative and nonsensical. But that's damn hard to do in this case, because this version of the charming story just works very well - and in some ways even better, than the original.

That's not just because of the picturesque Newfoundland setting and the delightfully dry humor. Rather, it's the wonderful actors who make this second rehash of the story so worth watching. First and foremost is Irishman Brendan Gleeson, who is simply magnificent as the Canadian roughneck. Murray's inventive, but especially at the beginning still a bit clumsily executed attempts to wrap the young doctor around his finger gain additional wit due to Gleeson's charmingly brittle play, which clearly intensifies the already extremely high feel-good factor that the film exudes. And so the plan to show Tickle Head as a paradise you wouldn't want to leave anytime soon at least works on the viewer.

Although the slightly socio-critical aspects of the story degenerate into a minor matter, as does the hinted-at possibility of a romance between Dr. Lewis and the pretty islander Kathleen (Liane Balaban), the production as a whole seems very mature and coherent. The little emotional spikes that director McKellar keeps throwing in aren't completely masked by the humor, but are able to provide some mild goosebump moments in addition to the many laughs. This results in an extremely likeable overall picture, which simply leaves the viewer happy after almost two hours. And that's exactly why the film can be forgiven for sticking so closely to the original and hardly breaking any new ground. Absolutely worth seeing

Cinema trailer for the movie "The Great Temptation - Lies Till the Doctor Comes (Kanada 2013)"
Loading the player ...