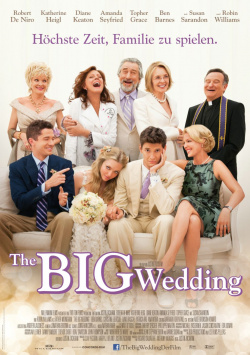 A tumultuous weekend is in store at the home of Don Griffin (Robert De Niro) and his girlfriend Bebe (Susan Sarandon). Alejandro (Ben Barnes), the adopted son of Don and his ex-wife Ellie (Diane Keaton) is set to marry his beloved Missy (Amanda Seyfried) at the family's swanky lakeside estate. And not only her stuffy parents Barry (David Rasche) and Muffin (Christine Ebersole) have announced their attendance at the lavish celebration, but also Ellie and their children Lyla (Katherine Heigl) and Jared (Topher Grace). Even Ellie's arrival at her former home, which she hasn't set foot in for ten years, foreshadows that this weekend will end in complete chaos. Also the visit of Alejandro's biological mother and his sister Nuria (Ana Ayora), who causes enormous hormone surges in the virgin Jared, but also the very special Father Moinighan (Robin Williams) bring the bride and groom again and again to the brink of despair. And when the old conflicts between Don and Ellie are unleashed in a very special way, the celebration threatens to finally fall into the water.

With The Big Wedding, the remake of the French comedy Like a Real Family, director Justin Zackham, who also wrote the screenplay, delivers his feature film debut. For this he was able to sign a very prominent cast, after which many a filmmaker would lick their fingers. There are four Oscar winners in this wedding comedy, which gives hope for a certain level of quality. But those hopes are abruptly dashed after only a few moments. Not only does the humor lack any form of timing or level. Also the performances of the actors, who are so good in themselves, are almost all subterranean. While Robert de Niro desperately clambers his way through the action, Diane Keaton, who hasn't exactly stained herself with fame lately anyway, finally degenerates into an embarrassing joke figure with a high foreign shame factor. And also Susan Sarandon and Robin Williams sell themselves in their relatively small roles far below value, whereby Williams can generate at least one, two good laughs.

The supporting actors can not save much more. Katherine Heigl, for instance, is once again reduced to looking around like a sore deer, an acting skill where only Amanda Seyfried in Mamma Mia Reloaded mode could rival her. And Brit Ben Barnes also falls completely flat as the Colombian adopted son in the unfunny wedding mess. Only Topher Grace exudes anything like charm and wit, though he delivers only a slight variation on the role that made him so popular in the comedy series The Wild '70s.

How Justin Zackham managed to attract such a cast with such a screwed-up script will probably forever remain a mystery. The fact is that he simply fails to even begin to realise the comedic potential of the story, which does exist. Platoon sex jokes, hackneyed clichés and completely inappropriately placed dramatic moments make The Big Wedding hard to stomach even for those viewers who are otherwise quite fond of light US comedies. Watching high-profile stars in such a shallow dud is a truly sorrowful experience that probably only completely painless fans of American wedding comedies will willingly subject themselves to in exchange for money.

Cinema trailer for the movie "The Big Wedding (USA 2013)"
Loading the player ...