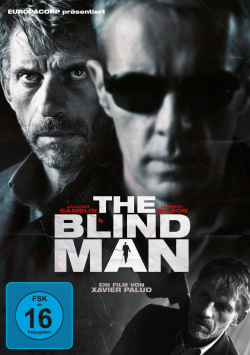 Film: Two gruesome murders, seemingly unrelated, shake Paris. A pretty woman is brutally murdered in her apartment and a rich Russian is blown up in an expensively bought car. Washed-up Inspector Lassalle (Jaques Gamblin) is the only one who immediately sees a connection between the two crimes. For the precision with which they were carried out suggests a stone-cold professional. Blind piano tuner Narvik (Lambert Wilson), of all people, is soon at the top of Lassalle's list of prime suspects. Together with his young colleague Héloise (Raphaëlle Agogue), the policeman does everything he can to find out how the blind man is involved in these brutal crimes. But Navrik seems to organize a perfidious game of cat and mouse with Lassalle, to which the policeman could soon fall victim himself...

Based on a story idea by Luc Besson, Xavier Palud has directed a solid thriller with The Blind Man, which is able to build up an enormous level of tension, especially in the first half. Although the action feels a bit overloaded and confusing at times, the film still manages to grab the viewer with its dark atmosphere, engaging visuals and good actors. Palud, who made a very good debut with his thriller Them - Play or Die, had left the impression of being just a flash in the pan with his second feature, the US production The Eye starring Jessica Alba. But even if The Blind Man doesn't reach the intensity of his debut, the filmmaker proves here once again his talent for a tense, gloomy atmosphere.

This is also supported by Lambert Wilson's intense acting. The way Wilson embodies the undercool, manipulative Navrik is what makes the film stand out from the crowd of similar genre films. For although Jaques Gamblin also delivers a good performance, his character is one walking cliché that even an accomplished actor like Gamblin (C`est la vie, The Name of People) can't bring any new sides to. This is a pity in so far as the film would certainly have been much more exciting if the cat and mouse game had turned out to be more balanced than it ultimately is.

The real problem with the film, however, is that the story clearly loses tension as soon as the perpetrator and motive are known. The story takes a new direction here, turning a brilliant and also very menacing killer into something all too ordinary. Although there is a lot more action than in the first two thirds of the movie, Lassalle's investigations aren't really gripping anymore. So, all in all, The Blind Man is a good and thrilling thriller, which unfortunately doesn't fully exploit its potential. For an entertaining home cinema evening for all friends of European thriller fare, it's enough!

Extras: Additional material has the DVD except for trailer unfortunately not to offer.

Conclusion: The Blind Man is a decent thriller that builds up a decent level of suspense with its gritty atmosphere and strong acting from Lambert Wilson that can't quite be sustained until the finale. Still, the positive moments are enough that lovers of European thrillers can safely take a look here. Worth seeing