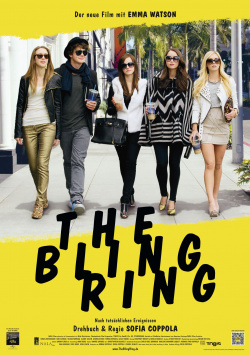 Sometimes life writes stories that sound so absurd you'd think they must have sprung from the mind of a Hollywood auteur. The story of Sofia Coppola's (Lost in Translation) latest film is such a case: in The Bling Ring Coppola tells the story of the teenage clique around leader Rebecca (Katie Chang) and her best friend Mark (Israel Broussard), who try to rid their upper-class existence, which is determined by boredom, of its pettiness by the ultimate thrill: via the Internet they research the houses of Hollywood stars who are currently attending award ceremonies or big parties. In the empty mansions, they then embark on a very special kind of shopping spree that not only gets their adrenaline pumping, but also their popularity with their classmates. But the more they go on a thieving spree, the more careless they become - and that has fatal consequences.

Although her film clearly wants to be understood as fiction, she has changed the names of all those involved in the Bling Ring and she has taken some dramaturgical liberties, Sofia Coppola's cinematic reappraisal of the spectacular case still seems very authentic. Coppola wrote the screenplay based on a Vanity Fair article by Nancy Jo Sales. For this she had all the interviews that Sales had conducted with the members of the Bling Ring at her disposal. She mixed them with her own experiences from her youth, hoping to reflect the very special attitude towards life and the way of thinking of these young people. In addition to the very well-chosen soundtrack, a spot-on set and the very special coup of actually being able to shoot in the house of Bling Ring victim Paris Hilton, the film works especially through the very good actors.

Whether Emma Watson, who completely frees herself from her Hermione image here, or American Horror Story star Taissa Farmiga, the young actors all prove what a good hand the makers have shown here in casting. What really leaves a lasting impression is Katie Chung, who delivers a truly great performance as the ice-cold and manipulative leader of the clique.

The fact that The Bling Ring feels so authentic and the characters seem so real may be the film's very great strength. But it is also its greatest weakness. For as Coppola so believably portrays the emptiness that reigns in the lives of these well-cared-for kids, so realistically tracing their daily lives consisting of superficialities, monotonous parties and petty conversations, the film also runs the risk of coming across as superficially empty and boring. After all, the focus here is not on interesting characters, but on spoiled teenagers who view reality TV celebrities as idols and for whom the latest gossip and fashion trends are more important than real feelings or deep friendships.

Already in her last film Somewhere, Coppola took the audience into an extremely superficial world, which somehow led to nowhere and left the viewer feeling completely empty. The Bling Ring doesn't seem quite as vacuous, especially since there is always a slightly satirical undertone to it, which adds a certain entertainment value. Still, Sofia Coppola only succeeds to a limited extent in really pulling the audience along. At the latest after the second break-in, the images only seem to repeat themselves and the whole thing degenerates into a never-ending party clip that only picks up speed and substance towards the end.

If Sofia Coppola wanted to portray a generation that only cares about appearances, material things and superficial admiration, she succeeded very well. In this respect, The Bling Ring has become really worth watching. But if at the same time she also wanted to direct a really entertaining, rousing film that makes its viewers think, but at the same time entertains them very well, the experiment unfortunately has to be judged as not quite successful.