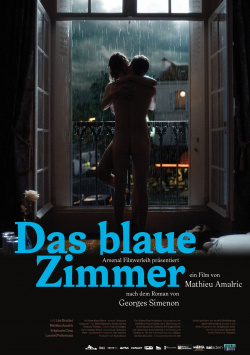 Whenever Julien (Mathieu Amalric) and Esther (Stéphanie Cléau) meet, they let themselves fall in their passion. They spend secret hours of heated sex together, giving free rein to their desire. Afterwards, they return to their normal lives with their unsuspecting spouses. For Julien, this could go on quietly. But Esther seems to want more. Julien doesn't want to give her that. He only suspects what the consequences will be when the police suddenly appear at his door and arrest him. He is accused of a serious crime and soon faces the ruins of his marriage and his entire life. But does he really have to atone for a crime he didn't even commit?

Actor Mathieu Amalric has once again taken on the duties of lead actor and director for The Blue Room. Based on the novel of the same name by Georges Simenon, creator of the popular Commissaire Maigret, Amalric has directed a mixture of erotic marital drama and chamber-play-like thriller. The result is a jigsaw puzzle immersed in atmospheric imagery that can captivate audiences with just a few words, especially at the beginning. The film derives much of its tension from the fact that the audience, like Julien, is initially kept completely in the dark about what happened, what he is accused of and how it could have come to this.

In flashbacks, we are led to the beginning of the fateful affair and can thus better understand Esther's transformation from sensual seductress to ice-cold beast. Also the hopelessness of the situation for Julien is intensified excitingly. Due to the good acting of the actors, especially of Almaric and Stéphanie Cléau, the story seems believable and to a certain extent thrilling, despite the sometimes very artificial staging. With a very tight running time of just 76 minutes, one might assume a gripping thriller-drama due to all these positive aspects.

But unfortunately Amalric gets lost again and again in too tough moments or in never-ending shots, in which the patience of the audience is tested several times. While it is understandable with what aesthetic concern he has implemented these moments. And there will certainly be some viewers who appreciate these ambitions. But from a purely entertainment-oriented standpoint, the effort at artistic pretension tarnishes the intensity of the story and, by extension, the overall entertainment value. For program lovers who appreciate sophisticated French dramas, however, the whole thing is still worth watching. However, those hoping for a thoroughly gripping affair of the particularly doomed kind based on the premise and the successful opening may end up leaving the cinema disappointed.

Cinema trailer for the movie "The Blue Room (Frankreich 2014)"
Loading the player ...