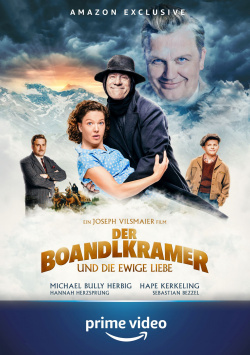 The Boandlkramer and Eternal Love

Day after day, the Boandlkramer (Michael Bully Herbig) takes care of bringing the souls of the deceased to heaven or hell. There have never been any problems - until the Bavarian grim reaper just can't bring himself to take away the young mother Gefi's (Hannah Herzsprung) son, little Maxl, after an accident on the train platform. Instead, Death has fallen madly in love. Without further ado, he passes off a soul (Sebastian Bezzl) in heaven that was actually meant for hell as Maxl and makes a pact with the devil (Hape Kerkeling) to conquer Gefi's heart. But in doing so, he upsets the divine order...

"The Boandlkramer and Eternal Love" is the last film by Joseph Vilsmaier, who died in 2020. To honor the multiple award-winning filmmaker, this second "Boandlkramer" film after Vilsmaier's 2008 comedy "Die Geschichte vom Brandner Kaspar" should definitely come to the cinema. Nor is this to happen after the reopening of the cinemas. But after numerous start date postponements, the distributor has decided to give the first broadcast rights to Amazon's streaming service Prime Video.

You can tell that Michael Bully Herbig, who contributed the idea for the film and also co-wrote the script, had great fun slipping into the role of Grim Reaper once again. Hape Kerkeling's delightfully over-the-top portrayal of the devil also makes for many a successful moment. In addition, the film is visually magnificent, which is why it definitely deserves to be seen on the big screen. Apart from that, however, "Der Boandlkramer und die ewige Liebe" is more of an average comedy that sometimes changes tone so violently that it just doesn't want to create a coherent overall picture. Sometimes too silly, sometimes too dramatic - here it would have been good if Vilsmaier had decided a little more clearly for a direction.

This is not to say that the film is bad. There are some really good laughs, some really nice moments here and there, and some wonderful showmanship. In addition, some guest appearances provide amused smiles. Still, the film suffers from the fact that the staging feels a bit unbalanced and some gags just come across as too over-the-top. So "Der Boandlkramer und die ewige Liebe" is nice entertainment, but overall falls short of its potential. Nevertheless: If you liked movies like "Die Geschichte vom Brandner Kaspar" or "Wer früher stirbt ist länger tot", you will get your money's worth here, too. Therefore applies: with small deductions worth seeing!

Cinema trailer for the movie "The Boandlkramer and Eternal Love (Deutschland 2020)"
Loading the player ...