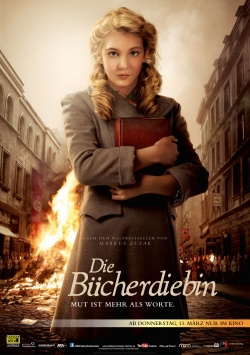 Germany during World War II: young Liesel (Sophie N&eacute;lisse) is taken with her little brother to new foster parents in Molching near Munich. But when the boy dies while still on the arduous journey to his new home, Liesel must cope all alone with her new foster parents, the good-natured Hans Hubermann (Geoffrey Rush) and his prickly wife Rosa (Emily Watson). But her love of reading, which she learns with the help of her new father Hans, her imagination, and the cheerful neighbor boy Rudi (Nico Liersch) help Liesel overcome her brother's death and come to terms with her new life. When Hans and Rosa take in Jewish refugee Max (Ben Schnetzer) and hide him in their basement from the Nazis, Liesel not only realizes that underneath Rosa's gruff exterior lies a lovable core. She also develops a close friendship with the secret guest that allows her to block reality out of her life for precious moments. But it's not long before the horrors of reality catch up with her.

Australian author Markus Zusak's novel The Book Thief is one of the biggest literary successes of the past decade. Since its worldwide publication in 2006, nearly eight million copies of the book have been sold. Translated into more than 30 languages, the novel has remained on the New York Times bestseller list for almost seven years, and Zusak has won more than a dozen awards for his moving story. With such success, it was only a matter of time before the rights were sold and the bestseller was made into a film. Brian Percival, who won an Emmy for his directorial work on the TV series Downton Abbey, took on the difficult task. The adaptation was difficult not only because of the scale of the original. Many aspects of the content (such as the role of the narrator, whose identity will not be revealed here for the few people who have not yet read the book) are also very closely tied to specific literary devices in order to translate directly to the medium of film.

From a purely technical standpoint, Percival and his team have done a very good job. In the construction alone of the fictional Himmelstrasse and the house with the number 33, in which Liesel lives with Hans and Rosa, the set designers have really done a first-class job. On the outdoor set of Studio Babelsberg, the era in which the story is set was brought to life with a great deal of attention to detail and with a great deal of closeness to the book. The actors leave a similarly positive impression as sets and equipment. Geoffrey Rush is simply adorable to kneel down with, while Emily Watson, especially in the second half of the film, is able to win the audience's sympathy in her very own, ornery way. But the star of the film is twelve-year-old Canadian Sophie Nelisse, who easily holds her own against her experienced co-stars with a great deal of naturalness and even more talent.

Underpinned by the enchanting music of old master John Williams, Nelisse's performance in particular is predestined to evoke great emotion in the viewer. But that's exactly what the film doesn't really want to do at first. As beautiful and moving as the story of The Book Thief is, the production of the film version is simply too conventional and strives for great emotions to actually build them up. To achieve this, screenwriter Michael Petroni (The Chronicles of Narnia) should have detached himself more from the original. However, as he tries to give admirers of the book as much of what they love about the novel as possible in the movie version, many elements of the plot can only be scratched on the surface. While everything that makes The Book Thief work is there, it's just the emotional depth that's missing. And with a story like this, that's really a shame. This makes the film not really bad, but it never manages to reach the greatness for which it would have had the potential based on the original.

But even the weaknesses of the script and its implementation can not prevent that in the end, many viewers will be in tears. For that the finale of the book simply has too great an emotional impact to be weakened by an adaptation. However, it becomes clear once again how far Percival's film falls short of the emotional quality of the book. The Book Thief has many positive aspects and numerous quite wonderful moments. But overall, the film did not become the poetic drama and the very big emotional cinema that could have been expected from this original. If you loved the book and lower your expectations a bit, a visit to the cinema can still be recommended. Worth seeing

Cinema trailer for the movie "The Book Thief (USA/Deutschland 2013)"
Loading the player ...