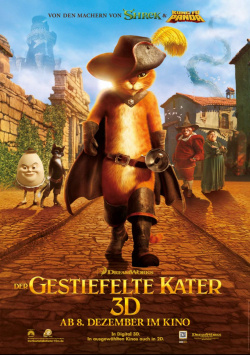 After the huge success of the first part of Shrek, it seemed unlikely that there could be a character that could rival the original Eddie Murphy voiced donkey in terms of popularity. But then came Part 2 and with it Puss in Boots, who quickly rose to arguably the best character in the Shrek universe with a mix of high cuteness factor, Spanish temperament and extreme coolness. After the fourth part of the saga around the green ogre, the pugnacious cat has finally got his own movie. And this one can not only entertain extremely well, but also surprise a little.

The Puss in Boots takes place before the encounter with Shrek. Long before that, the cat (voiced in German by Benno Fürmann) has already experienced many adventures in his world. Ever since he was a little kitten, Puss in Boots has dreamed of coming into possession of the legendary magic beans that grow all the way to heaven, where the goose lives that lays golden eggs. Once upon a time, he had gone searching for the beans with his best friend Humpty Alexander Dumpty (Elton). But then he was betrayed by his buddy and has been hunting alone ever since. But a supposed coincidence brings Puss in Boots and Humpty together again. Together with the racy Kitty Velvet Paw they want to steal the beans, which are in the possession of the crooks Jack and Jill (Christian Berkel and Andrea Sawatzki), and thus find the way to the legendary goose. But although the plan seems to work at first, the adventure soon takes a surprising turn.

The most pleasant surprise of Puss in Boots is that the story is set entirely outside the Shrek universe. There are no guest appearances by any other characters from the Shrek films, and not a single word mentions the fairy tale kingdom of Far Far Away. Instead, director Chris Miller (Shrek the Third) has directed a slick adventure film that mixes fairy tale fantasy elements with Zorro-like action interludes and an occasionally rather dark whimsicality that executive producer Guillermo Del Toro (Pan's Labyrinth, Hellboy) is certainly not entirely unaccountable for.

Of course, Puss in Boots is primarily animated fun for a younger audience. Many of the gags are therefore likely to stimulate the humour centre of children aged 8 and over in particular. But again and again there are also smaller moments that are either overlooked by younger viewers or simply not recognized as a gag. This is where the adults get their money's worth, for whom the film also becomes cinema entertainment of a particularly entertaining kind. In addition, there is the overall successful 3D optics, which comes especially in the more action-packed scenes to bear particularly positive.

Puss in Boots is a lovable, original and simply hilarious character. Learning more about him, his past, and even his childhood is really fun. Still, the film lacks that certain something to make it more than just very good animated entertainment. As much as the mixing of fairy tale elements and contemporary pop culture has worn off in the Shrek movies, especially in the first part it made you as a viewer feel like you were seeing something new, something cheeky and fresh here. Puss in Boots, on the other hand, seems more like an homage, a visit to a familiar world, which is fun, but lacks the big wow effect. Still, the attempt to make the film seem completely original and to take the beloved main character almost completely out of the familiar context is a credit to the makers.

Puss in Boots may not be the best animated film of the year, may not offer the most stunning 3D visuals or the best gags. But the nice story, the wonderful title character and some incredibly funny ideas make this animation fun an enjoyable movie experience for young and young at heart animation fans. If you're looking for fairy tales, action, humor, and fantasy, you'll definitely be well served here. Worth seeing